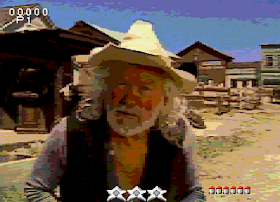 Genre: Action
Perspective: 1st-person
Gameplay: Shooter
Art: Full Motion Video (FMV), Live action
Setting: Western
Published by: American Laser Games
Developed by: American Laser Games
Released: 1993
Platforms: SEGA CD / Mega-CD, 3DO Interactive Multiplayer, DOS
Mad Dog McCree - the first experience of creating an FMV series from American Laser Games. The plot of the game fully corresponds to the canons of the classic western. The player in the role of anonymous wanderer enters a small peaceful town, somewhere in the Wild West. The scoundrel known as the Mad Dog McCree with his gang terrorizes the city, the mayor's daughter, like himself, is kidnapped, the sheriff is locked in his own prison, all residents are in a panic. Naturally, only a fearless single hero can restore peace and tranquility. After a brief briefing at the old gold miner and shooting in bottles, the first scoundrel appears, plotting to send the old man to the forefathers. This is where the excellent reaction and ability to handle the revolver quickly - because there are only three lives. Let's start, perhaps with a saloon, there is a One-Eyed Jack juggling with keys from the prison. Then we stop the bank robbery, go through the pen (the most difficult part of the game), then jail. In the mine, we need to find the map leading to McCrea's lair. Then we get to the lair, we release the mayor and his daughter, and then we start shooting with the main villain, not forgetting to fire off his henchmen.
The game Mad Dog McCree has become the standard for all subsequent releases from ALG - continuous shooting of villains and occasionally making decisions + practice shooting at fixed targets.
Systems where you can find this game: Arcade, 3DO, CD-i, DOS, Mac OS, Sega CD, Windows, DVD, Wii, 3DS, iOS. As it is in the collections Gunslinger Collection for 3DO and Mad Dog McCree: Gunslinger Pack (Wii).
In order to save the game machines were released already in four variations, the classic version - Amiga 500 for the game, the LaserDisc player for video. There were also versions with 3DO inside, there are more videos in them, but CD drives were wearing out pretty quickly. Nowadays Mad Dog McCree was the first game from American Laser Games, republished by Digital Leisure in 2002 in the format of a DVD game with improved video and sound. And in the DOS version you can play together. The only save slot allows you to return to shooting cowboys later.
Sega CD: Honestly, the quality here somehow saved. Yes, the video is almost full screen, but sometimes you will not see enemies, or you'll shoot some good-hearted. But on the other hand - in Mad Dog McCree an infinite number of sequels.
The game was released on a gaming machine, and later migrated to 3DO, CD-i, DOS, Macintosh, Sega CD, Windows, Wii, iOS.
‹
›
Home
View web version