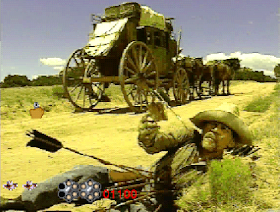 Genre: Action
Perspective: 1st-person
Art: Full Motion Video (FMV), Live action, Video backdrop
Gameplay: Arcade, Shooter
Setting: Western
Published by: American Laser Games
Developed by: American Laser Games
Released: 1994
Platforms: 3DO Interactive Multiplayer, DOS
Shooter - a real movie in the style of "Crime Patrol. Just at the time when you go on a journey through the wild West, the McCree band, nicknamed the Mad Dog, grabs one of the border towns, robs the bank, ravages the bar, smashes everything in its path ... What can I say - Wild West !! You yourself are destined to restore justice.

A or R is the fire
Clamped B - accelerates cursor movement twice
Clamped C - accelerates the movement of the cursor four times
X - call the main menu
The weapon shoots while the cartridges remain in the drum shown at the bottom of the screen. When the weapon is discharged, lower the cursor down-the weapon will turn to the ground. Now press A or R, and both reels will be recharged.

When you see the spittoons or cow skulls, do not be too lazy to shoot at them - perhaps you will get help.
If you were killed, hurry before the Gravedigger appears and press PAUSE. Choose "Continue", and you (again live) continue not from the beginning of the level, but from the place where you were killed.
‹
›
Home
View web version