The Adventures of Willy Beamish (DOS) 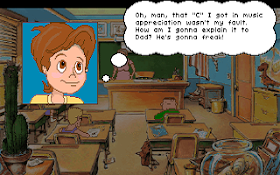 Genre: Adventure
Perspective: 3rd-person
Gameplay: Graphic adventure, Puzzle elements
Interface: Point and select
Published by: Sierra On-Line
Developed by: Dynamix
Released: 1991
Platforms: DOS, SEGA CD / Mega-CD
Willy Beamish - the guy happy and cheerful . And now, when they finally came the summer holidays , it will come off in full. Unless, of course , it will not interfere with parents and other adults are boring and dull ... But then we help him - Willie character does not allow him not getting into trouble , so to do it from the add haul- we pretty regularly ... Especially considering how he got into the room for the breakdown of offenders predkanikulyarnoy line and how he wants to get to the championship game on consoles, the company " Nintari " (sic!).
Home brutal feature of the game - quite grown- complexity of the individual puzzles , able to bring to incandescence rather weak individual parents trying to help their child to go through this toy. 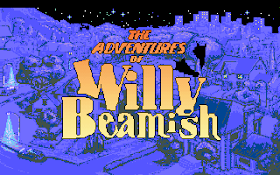 Coming out of the class , you will find a coach who will require you to Hall Pass. Click on themselves to invoke the inventory write white chalk on a board word 'Hall Pass'. Click on it and move beyond the inventory . Give tablet coach. Walk -in closet. The toilet Spider require anything from you. Give him the Game Buddy. Now you can leave the school .
Around the house Willy. If you hurry , you can intercept the letter which he sent to your parents director . Take the letter . Come into the house . Go to the kitchen . Talk to the mother. Shake Brianna, but do not overdo it . Mom will make you cut the carrots and you cut your finger . Climb into the tub. Press TAB, and you will see an arrow pointing to one of the lockers . Click on it and take a first aid kit . Use iodine and plaster.
Return to the room and play with Nintari. You can not do that until until podlechites finger.
Go to the dining room and dine . Be a good boy and give the letter to the Pope. He will get angry and give you the keys of Nintari sister. After eating, head upstairs . Mother asks you to sister conditioner . Go to Brianne and help her back to bed. Go to the bath. You will see the air conditioner and the keys on the table . There are several options how to select key. First - use it on a frog , and when she became frightened , pick up the key . The second - to take her diary and use it on the same . She'll give you the keys , but this option is not recommended because diary may come in handy later .
Return to the room and open the system Nintari key. Play a few rounds and go to sleep .

Wash the car and the father will give you $ 5 . Climb to the top. Talk to an exercise room with his father. Exit the house and go to the wooden fort . Talk to friends . Take a comic book . Look , Horny fell in love with Gigi. After viewing the animation leave the fort and you find yourself in a pizzeria . Give a man a $ 1 and it will take pictures of your team . Now you will Spider, answer him honestly and he will let you go to the restroom . Take the sign there 'No Smoking' and throw it in the trash . When Spider will go again and will require you to something , give it a comic book . Now get out of there as quickly as possible . Go to the park. Buy for $ 1 Coke "slam dunk". Click on Horny and on the ground to prepare for the jump. Horny will jump further if Gigi nearby. If you give him a Coke , then he jumps well sooooo far . But giving him the bottle flies, you make him sleep. Get out of the park. Go to East Frumpton. Go to the fountain and take the badge . Do not touch the other . Talk to the woman at the ticket office . Go to the lottery machine , take out her ticket. Go home .
Sooner or later you will present to the nurse . Go to the kitchen , then the dining room. The nurse will turn into a bat and start hunting for you . Save your game ! Run the bath and take hairspray . Run into the room Brianna, take away the mouse the cat . Run into the living room. Click on the vacuum cleaner. Click on the bat spray . Click on the table to use it as bait. When a bat at her rush , click on the target. End of the day .

Go to the fort. Talk to friends . Take ants. Leave . Go to West Frumpton. Give badge man. Ferry on the ferry. Take a photo tour - they will give you a cherry bomb and ninja star . Go to Tootsweet. Take shape with the front of the rack. Leave . Go to the Plumbers Union. Listen to Louis. Leave . Go to Golden Bowl Tavern. Talk to the man trying to enter the tavern. Keep trying until the gang . Ray will throw you the key . Save your game ! Throw a bomb in a gang . Until then , until the smoke clears , the key open fire hydrant and immediately go to this place. Go to Tootsweet. Talk with tourists - if you are polite to them ( replica number 1) , they will help you. Once they win a gang , you go home. Go to sleep .

Go to the fort , talk to a girl. Go to West Frumpton, Ferry . Go to Rlumbers Union. Climb to the office through the window. After some time in the office break into Louis, lift off the table and throw plombirovschik in it - it's only for a short stop him . Take from the table ID. Leave . Go to Tootsweet. Give input form man. Give Horny jar of flies (or put it next to the Turbo Frog). Turbo Frog eats flies from banks . But do not let it fly straight and do not let Horny slam dunk cola - you disqualified ! Wait for the start of the competition . First of all, save your game. Take second place easily , but in order to take the first place , it is necessary to practice . To do this, just jump whenever you want without worrying about distance jumping. But do not click thoughtlessly - when the button is on top, Click, and then wait until it will once again be on top . Since Turbo Frog sleeps half of the race , long clicks will help you win if you jump far enough before he wakes up. After the competition, go to Tootsweet. You get caught . The room guard key , click on the circuit. Combined key and click on the chain guard. Say 'Hoopa, Coiler, Agamemnon ". He immediately shut down. Exit . Go to his new toy into the harbor. Look inside and take a tape recorder. Go to Frumpton Mansion. Talk to parrot only watch the speech because it can raise alarm (try to choose a replica in this order: 1, 2 , 1, 2 ) . Go to the dining room . Take a tablecloth and a cup . Even when you are not on the screen, you can enter the inventory Willy, by clicking on the chair. tablecloth click on the chair . If you want to see how are Leona and Louis, use a magnifying glass , but do not go in that room - caught ! Exit to the hall . tablecloth click on the legs of the statue ( armor ) and dump it. Take the helmet and map.
Go to the kitchen . Throw in a cup of cook . This will distract her . Sneak her to a large vat . Take a saucepan and pour its contents on the floor directly behind the cook. Click on the pan and move it closer to the cook . Go out and you will find yourself on the other side of the kitchen . Jump on the conveyor. You jump out in front of the cook , who falls into the pan and start screaming . Her to shut up , put on her hat . Press the right button on the control panel pipe to free frogs. Leave . You get caught , but do not worry - help is coming soon !
After Select from the water , go to Plumber Union. Go to the phone booth . Place the handset on the tape . Start recording. Dial the number to 432-7446 to record a conversation with Alyssa. Turn off the record . Then call the Golden Bowl Tavern, Call Ray , and play on the tape recorder . Leave and go to the Golden Bowl Tavern. In the tavern, give a person a lottery ticket . After the shock , take calendar. Go to the shop and give it a working calendar. In order to go into the studio , show the guard 's license.
Inside quickly approach the control panel . Open the cover and turn on the switch . Press the buttons in the following sequence: brown, purple , green, violet ( the correct sequence is shown on the map you found in the Shell ) . Turn the joystick and it will kill the two guards chasing you . Go to the exit on the right.
Go to the control panel. Turn on the power . Enter AIR, press ENTER. Two guards die. Enter TRAM and press ENTER. Man throws hat in you . Crouch , then run up to the fallen hat , pick it up and throw it back . So you get rid of it . Run back to the middle of the conveyor , jump in the car and explore the tunnels .
In the tunnel, move forward , left, right , forward and to the left, you will find Gordon. Save the game . You must act quickly to save Gordon. Use the yo-yo on the bad guys. Change the cursor on the '+' and click on Leona. Drag and drop it in the Louis dirty pool below. Press TAB to switch active zone on the screen and click on the red arrow that appears . Pour out the dirt from the pool - you saved my father.
‹
›
Home
View web version