The Adventures of Willy Beamish (SEGA-CD) 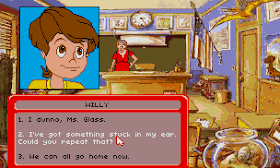 Genre: Adventure
Perspective: 3rd-person
Gameplay: Graphic Adventure, Puzzle-solving
Published by: SEGA of America
Developed by: Dynamix
Released: 1993
Platforms: SEGA CD / Mega-CD, DOS
A fascinating adventure game The Adventures of Willy Beamish. Describes the adventures of the mischievous nine-year-old boy Willy Beamish living in the town of Frumpton. He is a typical American child of the nineties, he likes to play video games, is fond of science fiction and just loves hanging out with his friends in a tree house. He has two sisters, one of which is still too small. Parents love him, but because he is too spoiled, they seriously think about the military school.
In the game, we get acquainted with Willy Beamish at a time when his beloved frog Horny tore off the final school fees, tearing off the wig from the head of the director. And he is left in school as punishment. That's where the game begins, we need to help Willy Beamish get out of various unpleasant situations. The game has many options for the development of the plot. You can choose to remain in custody or escape, in order to intercept a report card with poor ratings. You also need to follow the Special School Trouble-O-meter, which ranges from a good boy to a Cadet School. One of Willie's main goals in the game is to participate in the Nintari championship (assembling the words of Nintendo and Atari).
The game is full of various adventures that complicate Willy's life. His father suddenly loses his job, nurse a vampire, hooligans terrorize the city, and even an uprising of plumbers. All this Wili must be prevented.
But do not think that this game is designed for children, rather, even this game is designed for adults: a different play of words, which only costs a young school nurse blonde with big breasts. The game has a lot of humor.
Special differences Sega Mega CD version of this game from others is that here you can play a game in the game (mini-game) Super Space K'Noidtrix on Nintari in Willy's bedroom. This combination of several games Space Invaders, Tetris and Arkanoid. And also on a pause you can play in the so-called "Laser Balls".
‹
›
Home
View web version