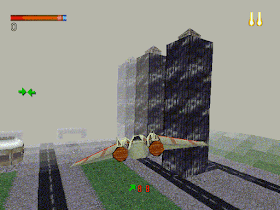 Genre: Action
Perspective: 1st-person, Behind view
Vehicular: Flight / aviation, Space flight
Setting: Sci-fi / futuristic
Published by: Telstar Electronic Studios Ltd.
Developed by: The World Federation Entertainments Network
Released: 1996
Platforms: DOS, 3DO Interactive Multiplayer, PlayStation (PSX, PS1)
In this arcade simulator you will feel yourself in the shoes of a test pilot , who was trusted to pilot the newest model of a space fighter . To verify that the model that is capable of and you as its pilot you entrust perform a variety of jobs increasing complexity.
Structure and non-linear missions as an inverted pyramid . You are not given the right to choose the first mission , but after its successful completion you will have a choice of two missions , then - of the three , and so on until five missions available simultaneously. 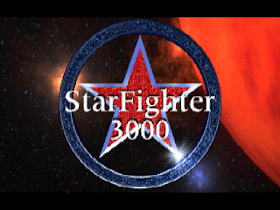 You have enough to fly over the three-dimensional landashaftami cracking and learn how to air and ground targets . First mission is relatively easy, but after their passage complexity makes rapid leap , and you have to exert all efforts to successfully get out of the next skirmish . Sometimes you will have to cover his partner , but do not get too rely on their support . In these hostile skies with any danger need to learn to deal himself.
As in most arcades in SF3000 opponents occasionally leave behind crystals that increase in the capture of the power of your laser. At the same time , brought together a combination of such crystals , you will increase the power of his arms repeatedly. Bonuses also occasionally dropped on parachutes , which must be chosen before they touch the ground.
But your opponents were not born yesterday , so that damage to your vehicle are inevitable. In the manner of the simulator , the more damage received your steel bird , the more difficult to manage it . To avoid this, attached to your vehicle repair small drone who undertakes work in the preparation of the first holes in the hull . But it is necessary to be careful , because the patch is particularly serious damage to your miniature assistant may not under force.
The graphics are pretty average , considering the year of the game. The reason lies in the fact that first appeared on the SF3000 3DO, where it then and has been ported to PC without any significant changes. Game clearly lacks hardware antialiasing and slightly higher resolution . Yes, and the inability to remove the annoying fog, you can not see more than a hundred meters of gaming space , a bit annoying.
The most interesting feature of the game engine is the ability terramorphing - alteration. Volleys of guns onboard , you can easily level the hill and enemies , who consider themselves entrenched in it , to the ground.
Cross between arcade and simulator , which has taken the best of both genres , SF3000 is surprisingly interesting game , which is not a pity to spend ten hours.
‹
›
Home
View web version