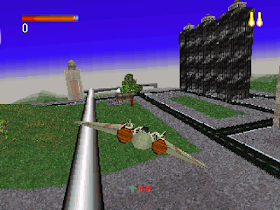 Genre: Action
Perspective: 1st-person, Behind view
Vehicular: Flight / aviation, Space flight
Setting: Sci-fi / futuristic
Published by: Acclaim Entertainment
Developed by: The World Federation Entertainments Network
Released: 1996
Platforms: PlayStation (PSX, PS1), 3DO Interactive Multiplayer, DOS
Starfigter was voted the Best Arcade Air Combat Game of the Year by numerous gaming publications. The game developer, 3DO, has put a lot of innovations into the game, which distinguishes Starfighter from many other games of the same genre. I know, I know, some were dissatisfied with the graphic embodiment of the gameplay, they say they could have made the graphics more abruptly, you understand their tanks are square, the landscape is all in pixels, etc., etc. But is happiness only in graphics? How many of these "graphic masterpieces" are on our shelves? In the game Starfigher (SF), you are offered a single fighter to perform more than 60 different missions, but what a fighter! While in the air, it can build up wings, increase fuel tanks, and hang huge missiles on the wing, and other upgrades, and all this without landing! How? Just. The key importance in the game is assigned to crystals, which appear here and there after the destruction of any (!!!) objects, be it houses, trees, and, accordingly, the enemy. Crystals have different shapes and colors and collecting them in a certain sequence to determine the aircraft upgrade. But even here the developers decided to diversify the gameplay by introducing a negative aspect into the collection of crystals - collecting certain crystals in a certain sequence can significantly reduce the characteristics of your ship. However, do not worry, everything is fair here, having memorized the combinations you will quickly understand what needs to be done. By the way, this is not the only way to upgrade an aircraft. Periodically, external support is provided to you, expressed by dropping from heaven (read Mothership) a Supportdrop - a certain object, catching which you will receive an additional upgrade.
Missions have a wide variety of purposes - tracking and destroying targets and objects, both in the air and on the ground, as well as in space. At the same time, your arsenal is very extensive, a powerful laser, a variety of missiles, including decoys to avoid enemy missiles. And, incredibly interesting, you can increase the ammunition capacity, that is, on the fly, just like above. Successful completion of a mission either automatically leads to the next one, or requires you to return to the cruiser (Mothership) first, which is incredibly fun. And what about maneuvering between buildings in order to destroy an object or reconnaissance!
Much attention has been paid to the pleasant details of the gameplay. In particular, you have at your disposal a variety of battle cameras, including such exotic ones as the angle from the perspective of a homing missile, and, perhaps even more interesting, a view of the battle from the perspective of your enemies.
There is also a tactical element in the game. For all tasks you go in splendid isolation, from time to time you also have wingmen for whom you determine priority goals.
Now about the sound ... The music track is one of the best in the game industry. Truly interesting, varied and modern melodies will lead you to the idea that you definitely need to get them into your music collection. There is no need to talk about sound effects, they are also at the proper level.
As for the graphics, I, traditionally, will not say anything, progress is made by leaps and bounds, including in the creation of games, a bit old, but we love old games and this is the main thing.
‹
›
Home
View web version