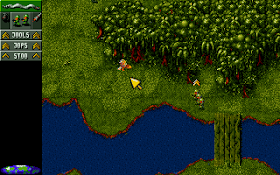 Genre: Action, Strategy / tactics
Perspective: Bird's-eye view
Gameplay: Real-time strategy
Visual: 2D scrolling, Isometric
Pacing: Real-time
Interface: Multiple units / characters control, Point and select
Published by: Virgin Interactive Entertainment
Developed by: Sensible Software
Released: 1994
Platforms: DOS, SEGA Genesis / Mega Drive, 3DO Interactive Multiplayer, Super Nintendo (SNES), Atari Jaguar
The game is divided into a series of missions, which, in turn, are divided into phases. The player controlling the detachment of soldiers armed with machine guns, grenades and grenade launchers, must destroy all enemies on the map, blow up all the buildings and release the hostages. Initially, the player is available detachment of two men - Jools and Jops. As you progress through missions, the number of soldiers in the unit increases. Only 24 missions in the game (the free demo version for PC - 8 missions).
Unit can be divided into several parts, and can be distributed between entities rockets and grenades. When one of the units automatically go to the second defense, shooting any approaching enemy.
Mission differ in climate (jungle, desert, arctic), and duration. In some phases of a technique which can be activated. Also, there are different levels traps - quicksand, quagmire, booby-stretch. It is noteworthy that as a trap in the winter missions can be used snowman (as shown in the intro to the game for the PC-version). 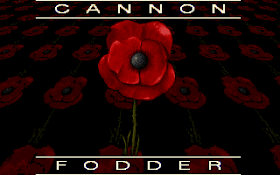 Version of the game for different platforms have some differences, for example, use different backgrounds, including the image of a flower cultivation in the intro to the version for the console «Sega» is somewhat different than the image on the other platforms, the computer version of the passage is not a white box in the corner screen (to give up your keyboard (press Escape)), in the version for «Sega» need to press the Pause button to go to the menu selection control soldiers or view the map. Differently organized preservation: the PC is done by ordinary writing to a file under a name after any mission to «Sega» download the desired level is through a special password, and version for «Super Nintendo» to reach the desired level you must press Select. Differently looks final scene: the full version for PC says that «El Presidente» defeated in the demo appears «The End», and in versions for «Sega» - inscription «Congratulations, You win!». Slightly different sounds and the main song for the game, and sometimes she does half trimmed (on «Sega», for example).
The names of the levels contain a lot of humor and puns, for example, Pier Pressure, Tank You Very Much ...

Port to the Amiga Power 21 contains demo game Sensible Soccer Meets Bulldog Blighty (or Sensible Soccer: England vs Germany). It was a parody of the Christmas football match between the Germans and the British in 1914. Players were replaced by soldiers from Cannon Fodder, and the ball - on a hand grenade, which after a few minutes to flash and exploded, injuring adjacent players.

When Sensible Software was purchased by Codemasters, the new owners decided to create a port of the game for Game Boy Color. This version has been greatly curtailed - in the course were only two men, and greatly reduced size of the card, which is why through the game much easier.

In 2004, John Hare founded a small company Tower Studios for the production of mobile phone games. In 2005, she released the game Cannon Fodder. Because of the particular cell phone for this game had to radically alter management soldiers.

August 28, 2006 Codemasters announced the game Cannon Fodder for the Playstation Portable. The game was to preserve the traditional look from the top, but to be fully three-dimensional. The project was canceled.

The game was banned in Germany for the brutality shown by the game and the glorification of war. Enemy could be hurt, and while he was bleeding and screaming in agony, could shoot it again and again, until he died from loss of blood.
In general, the game is a satire on the war - she became famous for parodying military actions and events of the war: poppy, the symbol of the veterans of World War endless queue of volunteers for the war against the hills to the graves of dead soldiers.
Wild poppy, a symbol of the veterans of World War I, was used as the logo of the game. The Royal British Legion has opposed such use, saying that buyers may find that the game is related to the legion. Publisher Virgin managed to remove the box with the image of poppies before the game, but Poppy was on the splash screen to show off the game, because of what the developers had to add the words "This game has nothing to do with the Royal British Legion."
User Manual for PC-version ended with the words: «Cannon Fodder is to show, albeit not the usual way that the war - a waste of lives and resources. We hope you never find out the hard way.

References in other games