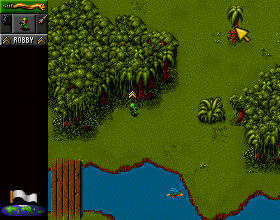 Genre: Action, Strategy / Tactics
Perspective: Top-down
Visual: 2D scrolling, Isometric
Pacing: Real-Time
Published by: Virgin Interactive Entertainment
Developed by: Sensible Software
Released: 1994
Platforms: 3DO Interactive Multiplayer, Super Nintendo (SNES), SEGA Genesis / Mega Drive, DOS, Atari Jaguar
Okay guys, here's the situation: we go to war and we need volunteers (read between the lines - cannon fodder), who do not mind fighting. It's true, you are a soldier of fortune, and if so - grab the rifle in one hand, your ass in the other, quick instruction and into battle! Go-go-go!
Someone finds this game very funny. Indeed, funny graphics, small, almost insignificant soldiers. But in reality it is not so. Uncovered black humor does not hide one. After successfully completed missions, your soldiers (and each of them has a name) are given ranks, and you can not imagine how insulting to lose a major who has gone with you is not one dangerous mission ... An inimitable game that everyone must know. The memorable music makes you play the game again and again.
At first the game was released for the Amiga. In versions for PC and Amiga, the movements were controlled by the mouse.
Versions for SEGA Genesis and SNES differ little from each other. Equally good.
For the 3DO version, the control mechanism is moved to the joystick. This facilitated access to various types of weapons, and in general all game procedures became much more serious. Also, they added an introductory video and a rastaman song "In War Never Happened So Much" to the unforgettable melody that was. The graphics were not changed much, except that they made everything still more vivid and colorful. Instead of black screens and white text, of which there were many in other console versions, there are soldiers everywhere. Well, the music is also at a very good level.
In the version for Game Boy Color had to enter a limit - 2 fighters in the team. Also reduced the battlefield.

In the picture with a general view of the terrain choose any point and press A. After the mission ends, you will learn the names of the dead and see if your soldiers are raised in ranks.
Pointing with the arrow + A allows you to move the soldiers, B "turns on" the target for fire.
Close to the barrel is better not fit: exploding they can hurt you.
The first two stages-missions are to destroy all the enemies. Shoot from the corners so more reliably. Your soldiers (as well as enemy soldiers) can swim across the river.
On deep water (water is dark blue) soldiers can not shoot. Do not shoot barrels of grenades - you will perish.
In Antarctica (the third mission) make your way to the enemy on the eastern side. To rise in the ice, go even passes between the rubble. Strengthening against the 'peak is considered destroyed if the door disappears.
On the next ethane, attack from the southeast. Many grenades can be found in the north-west.
Fifth mission. Go to the end of the pier opposite the enemy fortification and destroy it with a grenade.
Local residents in the village are harmless if you do not harm them. Attack only buildings that have doors - these are enemy fortifications. Avoid dark brown areas in the southeast. Enemies can appear from a burrow in the west.
At the stage of "Barry Bazookas" several barrels-bazookas are located behind the ruined fortification in the southeast. To complete the stage, you need to destroy the enemies with the bazookas. Do not fall into the zone of their fire, retreat immediately after the firing of the enemy. Careful with the enemy's hole in the south-west.
At the stage "Skidu" pay attention to the grenade launcher on the west side of the river.
On the "Westward But" at the southern end of the canyon there is an ammunition depot. Gently destroy the fence from the west, without undermining the explosives. In the south-west there is a barrel-bazooka.
Enemies of dark color are more aggressive than usual.
In Greenland, each island is guarded by several grenade launchers. In order not to fall under their fire, always be in motion. Grenades can be found only in the east of the northernmost island. Pay attention to the hole of enemies in the south-west.
At the stage of the evil Knievel, the western side of the river is guarded by numerous enemies. Do not kill the Eskimo alone.
Do the next mission, do not step on the big spikes.
Storming the enemy's fort, destroy the grenade launcher first on the dais. Enemy forts do not take grenades, you need "BigGun".
Do the following task, go down along the eastern edge of the map, then go west to the large plant. Behind him, you can find 50 thermal missiles.
In the jungle, choose the path that leads to the west. Then it will turn to the south, there destroy the enemy structure. Enemies immediately hide in the leaves.
The final stage of "Donkey death tasticelastic" is required to pass for 99 seconds. In addition, you do not have a card. It should be divided into three groups, which will simultaneously deal with different things. First, point the teams to the south.
‹
›
Home
View web version