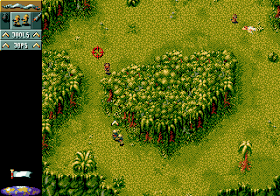 Genre: Action, Strategy / Tactics
Perspective: Top-down
Visual: 2D scrolling, Isometric
Pacing: Real-Time
Published by: Virgin Interactive Entertainment (Europe) Ltd.
Developed by: Sensible Software
Released: 1994
Platforms: SEGA Genesis / Mega Drive, 3DO Interactive Multiplayer, Super Nintendo (SNES), DOS, Atari Jaguar
Interesting game. You control a group of soldiers who must carry out missions. Basically, this is the elimination of enemy soldiers and buildings. The number of your soldiers for each job is limited, and you can not lose them (in any case, not all). For successful missions, soldiers receive new titles. Graphics average, but good music and a dynamic game action.

In order to change the standard soldier to a soldier with the most powerful laser, type on the title screen up + right + right + down + down + down + left + left + left + left + A + up + B + down + C + left + down + start. Now start the game and let your fighter with Rocket launcher shoot three times. You will see how the fighter will start spinning and scrap, and instead of him will appear a soldier with a laser. With this laser, you can easily destroy most of the objects, and also much easier to eliminate tanks and other armored vehicles.
If the stock of recruits is exhausted, and you were given the last chance to complete the mission - surrender and you will be taken to the next stage.