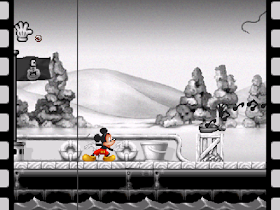 Genre: Action
Perspective: Side view
Visual: 2D scrolling
Gameplay: Platform
Published by: Sony Computer Entertainment Inc.
Developed by: Travellers Tales (UK) Ltd.
Released: 1996
Platforms: PlayStation (PSX, PS1), SEGA CD / Mega-CD, SEGA Genesis / Mega Drive, Super Nintendo (SNES)
In this game, the popular character Mickey Mouse gets a chance to go his own way from the time of its creation, stretching from 1928 to 1990 (the original product was planned to be published on the 65th anniversary of Mickey). All levels are created on the basis of the most popular cartoons with Mickey's participation, starting from the cartoon "Steamboat Willie" and ending with "The Prince and the Pauper", and earlier eras / levels are made in black and white. The gameplay consists mainly of jumping and fighting small enemies, from time to time you solve simple puzzles. The graphics of the game is 2D based on scrolling, in comparison with earlier versions of this game the graphics are slightly improved.
‹
›
Home
View web version