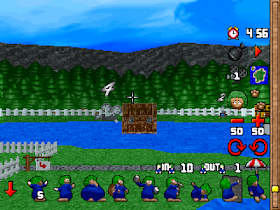 Genre: Puzzle
Visual: Free-roaming camera
Pacing: Real-time
Interface: Point and select
Published by: Psygnosis Limited
Developed by: Clockwork Games Limited
Released: 1997
Platform: PlayStation (PSX, PS1)
The story of the Lemmings which must be led through a path full of dangers, using their abilities and capabilities, has been walking on all platforms for a long time and successfully (for the first time, the upcoming series debuted in the 80s, now of the last century). At one time, the Psygnosis development team made a real revolution by endowing these small and completely brainless green-haired people (in fact, Lemmings are small animals living in the northern latitudes) with the ability to do something in the game, and not just run, jump and the like, which was typical of most games of that time. And here is our good fortune - Lemings came to the PlayStation, and even in 3D graphics, which in general somewhat complicated the task, but more on that later.
The essence of the game remains the same - at each level you need to spend a certain number of Lemmings to their exit house, while you use their abilities - dig, blow, stop (block), etc. to help other brethren move forward and (or) vice versa stop them from a rash step leading to death. If in the 2D version everything was simple and clear, it was enough to understand the capabilities of Lemming and react quickly to changes in the landscape, then in this game the aforementioned 3D environment makes the game very difficult, and the game camera (which, in fact, you must control) constantly disorientes you. But maybe you can handle it and start to enjoy the game faster than you have time to boil with anger. The game has perky music, funny sounds made by Lemming and many, many levels (over 120 or 150, I don’t remember) and four choices of the game’s complexity.
‹
›
Home
View web version