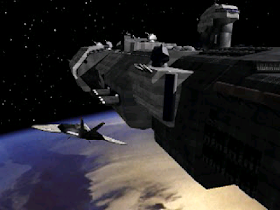 Genre: Action, Compilation
Perspective: 1st-person
Gameplay: Shooter
Setting: Sci-fi / futuristic
Published by: Electronic Arts
Developed by: Electronic Arts
Released: 1995
Platforms: PlayStation (PSX, PS1), 3DO Interactive Multiplayer.
You are offered a very good shooting game for the PlayStation system, more precisely, even a set of two games. In the first, the Shockwave Invasion Earth, an alien race invades the Earth to colonize. You play the role of the pilot of the Wild Card, (you can change it to your name), who was given the task of driving them away from Earth. A field of activity unfolds in front of you from the cockpit. Starting in Egypt, you then complete nine more more and more difficult missions in Peru, Los Angeles, and other parts of the globe.
The graphics of the game are significantly improved in comparison with versions for other systems (although I personally think that the version for 3DO looked more attractive). For some reason, all the action takes place in a night setting (visible to hide graphics defects). The landscapes and technical details look impressive, but the inserted movie episodes made with great skill are especially good. The soundtrack is also slightly improved. The game is quite difficult to complete, the missions are long, divided into several stages.