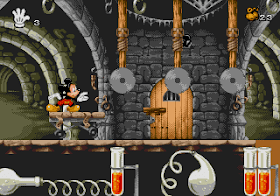 Genre: Action
Perspective: Side view
Visual: 2D scrolling
Gameplay: Platform
Published by: Sony Electronic Publishing Ltd.
Developed by: Travellers Tales (UK) Ltd.
Released: 1994
Platforms: SEGA CD / Mega-CD, SEGA Genesis / Mega Drive, PlayStation (PSX, PS1), Super Nintendo (SNES)
You have to go through all the reincarnations of Mickey, starting with the old black and white paintings of 1928 and ending with the last, color, 1990.
In total in Mickey Mania 7 levels, after each of them the boss waits for us. The game is gorgeous! Mickey is perfectly animated, he will not only have to jump and shoot some balls, but also ride on platforms, quickly reacting to the emerging obstacles. This is the only Disney game for Sega CD, so it's worth playing, especially since the game is done very well!
Mickey Mania was also for Mega Drive (from where they made the port on Sega CD), SNES. Later, after the changes, there was a release for the Playstation called Mickey's Wild Adventure. Honestly, each of the four games is unique. SNES does not have one level and the second level is not full. For Playstation improved graphics, and Mega Drive version seems to be the most difficult in the passage.
Initially, the game was planned for the 65th birthday of Mickey, but did not meet the deadlines and therefore did not become tied to the anniversary.
Level select: You must be on the "Sound Test" screen to perform this code. Set the "Music" option to "Continue", "FX" option to "Appear", and "Speech" option to "Take That". Then, highlight the "Exit" option. Hold Left for approximately 5 seconds.
‹
›
Home
View web version