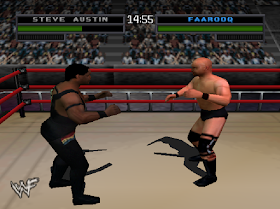 Genre: Sports
Perspective: 3rd-person
Sports: Wrestling
Published by: Acclaim Entertainment
Developed by: Iguana West
Released: 1998
Platforms: Nintendo 64 (N64), PlayStation (PSX, PS1)
WWF War Zone is the first WWF game to be made in 3D, which is why it got pretty poor graphics (wrestlers glide around the ring, and their movements are also performed in a bad way) and some other shortcomings. The gameplay of the game consists a little less than completely from memorizing combinations of various techniques and actually from trying to use these techniques in battle, which is not so easy (sometimes a wrestler may simply not reach the enemy). The stellar cast, though small, is still impressive: Ahmed Johnson, Bret Hart, British Bulldog, Faarooq, Goldust, Headbanger Mosh, Headbanger Thrasher, Kane, Ken Shamrock, Mankind, Owen Hart, Shawn Michaels, Stone Cold Steve Austin, The Rock , The Undertaker, Triple H (+ hidden: Cactus Jack, Dude Love, Pamela, Rattlesnake, Sue, Traner, Turok). As a result, we can say that, despite all the shortcomings of the game, it is still worth playing it, if only because it is the first WWF experience in 3D.
‹
›
Home
View web version