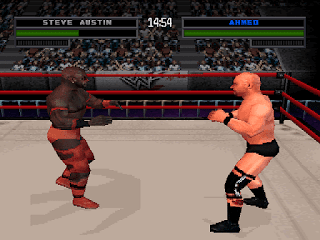 Genre: Sports
Perspective: 3rd-person
Sport: Wrestling
Published by: Acclaim Entertainment
Developed by: Iguana West
Released: 1998
Platforms: PlayStation (PSX, PS1), Nintendo 64 (N64)
This is one of the best wrestling games for the PlayStation. The characters in it are very significant and really cool. They even have a haircut. And their faces look much better than those of real wrestlers on the TV screen. There are eighteen of these guys in the game, but that's not all. For the first time in the history of the genre, you have the ability to create your own wrestlers. You can vary all known parameters - stamina, speed, etc. Image-making will give you special pleasure - the game allows you to dress and style the wrestlers to your liking. In addition, new options have been added to the game: you can take part in a tournament according to the Olympic system, fighting all fighters in a row in order to win the WWF title; you can choose one opponent; You can fight in a cage - whoever gets out first is the winner. There are no problems with the use of weapons - choose what suits you best - TVs or chairs. Added to the game and a mode for four players. Mastering simple movements (such as punching, kicking, running, diving) will not take you long, but becoming a good fighter is not so easy. To overturn your opponent, jump on top of him, having previously climbed onto the corner post of the ring, or throw him over yourself, you will have to work hard. Various counters show the health of the fighters, so it is always known how many more blows are needed to finish off the enemy. WWF War Zone is a very professionally made game, but it also has some traditional drawbacks. The movements are often too slow, which allows the opponent to deliver strong advance blows. And in four-player mode, the simple task of switching to a weaker opponent can be an extremely time-consuming ritual.
‹
›
Home
View web version