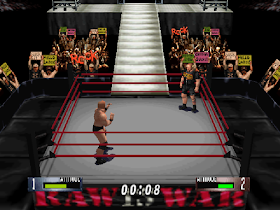 Genre: Sports
Perspective: Bird's-eye view
Sport: Wrestling
Published by: THQ Inc.
Developed by: AKI Corporation
Released: 1999
Platform: Nintendo 64 (N64)
The player takes control of a wrestler. The fight takes place in the ring, as well as outside it for 10 or 20 seconds, or, if the rules establish, an unlimited time. At the same time in the ring can be up to 8 fighters, players can control only four at a time. Each wrestler has a unique set of punches and tricks. During the capture, the player can strike, throw, go behind the opponent’s back or push him on the turnbuckle or ropes. Also, the player can block the blow, strike a counterblow or dodge (depending on the strike). In addition, the player can run, climb on the turnbuckles and the edges of the ring and from there inflict blows on the enemy. To win, the player must hold the opponent on the shoulder blades for three seconds or make them surrender from a painful reception.
During the battle, some HUD elements are displayed on the screen, which can be disabled in the options. Under the wrestler’s model is the player’s scale, which displays energy, a readiness indicator to give up and their angle.
Unlike a real show, the judge is not present in the game in the ring, and commentators are also completely absent. It is worth noting that in the game there is practically no physics: for example, the fragile girl Tori can easily raise a 130-pound Undertaker above herself.

Single fight - one fight, without any awards and titles. Victory by retention or pain (optional) is possible.

In WWF WrestleMania 2000, as in most other sports simulations, you can create your own character. You can choose gender, skin color, appearance, voice, techniques, combat characteristics, clothing, way out, special effects with it and the image on the titantron. Clothing is selected in separate fragments: you can “stick” sleeves and trouser legs to the source material (T-shirt and shorts), etc. And you can also create a copy of the database of the finished wrestler.
‹
›
Home
View web version