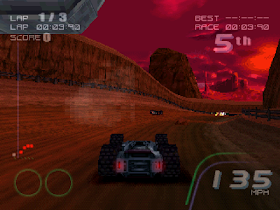 Genre: Racing / Driving
Perspective: 3rd-person
Gameplay: Shooter
Setting: Sci-Fi / Futuristic
Published by: Psygnosis Limited
Developed by: Attention to Detail Limited
Released: 2000
Platform: PlayStation (PSX, PS1)
At the heart of the game, as before, are racing in jet cars, at speeds of 400 km / h, armed with a wide variety of means of attack and counteraction. Cars again have no concept of top / bottom, drive on the floor, walls and ceilings.

Changes in comparison with the first game Rollcage:

The game features 8 single game modes. Some are available initially, others are already available.

Races on the tracks, in the company of four rivals. In each league to go through four groups of tracks, one from each world. Three tracks qualifying, and if the player, according to the results of the races, occupies the first line in the table - then gets access to the eliminator [2], the race to the departure, where the last one who came on the circle - is destroyed.
By passing through each eliminator, a small video is shown. By passing the fourth - the next league opens.
By passing the fourth eliminator in the third league - the Stay Alive mode opens.

The mode is available initially.
One race, for a selected number of laps, for the selected track, on the selected difficulty. Allows you to hone knowledge of the tracks.

The mode is available initially.
The player is alone on the track. All weapons on the track is replaced by accelerators. Starting from the second round - a holographic double goes along with the player, showing the best lap in this race. The number of circles is not limited.

The mode is available initially.
The player is given 16 runs that have to go for the minimum time, collect all the objects on the track and brake on the finish field. You need to meet the qualifications for the opening of the next track.

25 stunt tracks consisting of serpentine, inverted, twisted, frozen and broken tracks. You need to go from start to finish, slow down at the finish field and meet qualifications for the opening of the next track. Sometimes you can cheat and from the start immediately get to the finish line, passing the track in 5-8 seconds, instead of 1:05 minutes.

The mode is initially closed. Access through the passage of the entire League.
The task is to go through all the tracks one by one, with the first result.

The mode is initially closed. Access through the passage of stunt tracks.
The task is to destroy all destroyed objects on each track in the shortest possible time.

The mode is available initially, but until the tracks of all worlds are available - it does not make sense to play it.
The task is to go through all the tracks, one by one, one single circle. In the offset is the total time.

The game has 6 worlds where the tracks are located:

Each car can carry two weapons that can be used at any time. Additional weapons are located on the track, in the form of spinning blamb. All weapons are divided into defensive and offensive. Unlike the first game, each weapon has two levels (Normal and Advanced), and you can find out which player you picked by flashing luminosity around the ring with weapons.

Normal: A single rocket, by default aimed at the nearest object located on the track, in the absence of those, flies forward until it encounters an obstacle. The player has a button "Sight", which allows to aim at the car ahead.
Advanced: Double Missile Launch
Counteraction: Shield, maneuvering, moving out of sight.

Normal: 100 shots in the direction of travel. Yellow plasma clots disrupt control and knock out the shield.
Advanced: 100 shots in the direction of travel. Green plasma clots are homing, knocking out the shield "on time", disrupt control and demolish from the course.
Counteraction: Shield, leaving the affected area.

Normal: A triple rocket, being fired, flies forward, “through”, along the terrain of the track, until it crashes into an object or wall. If 2 or more cars fall on the way, everyone will be attacked, and the rocket will fly farther.
In Battle mode, this is the only available weapon. When it hits the enemy, the enemy dies and is reborn on the respawn point.
Advanced: Double launch gimlet. When you click "Back" - will be launched back.
Counteraction: Shield, leaving the affected area.

Normal: Laser blades out of wheels. They create a freezing effect, as a result of which a car that has fallen under the rays loses control.
Advanced: The combination of blades and accelerator.
Counteraction: None.

Normal: The effect is when the enemy’s cars are close to the player’s time, and the speed decreases slightly.
Advanced: Effect, when for all enemy machines time becomes “viscous”, and the speed is reduced to 10 times.
Counteraction: None.

Normal: A rocket that flies across the entire track, overtakes the leader, turns around, and sightingly attacks. It can be knocked down by the terrain, sharp turns, and tunnels.
Advanced: Same, but two rockets are launched. The first blows down the shield (no matter if it is there or not), and the second blows down the leader ...
Counteraction: Shield, flying towards a rocket to attack with a gimlet, with a certain skill - you can shoot down a single rocket. An advanced rocket can be shot down with a combination of two gimlets, or a gimlet and a shield. On the strong bend of the track, you can launch single rockets that will explode in front of the machine and destroy the rockets. You can shoot down a machine gun (see above).

Normal: A wormhole is formed, into which you fall, and drive out in front of the vehicle in front. If you're lucky, you can jump into someone else's wormhole.
Advanced: Go ahead of the car, which was in the first place. If you were in first place, you will find yourself in front of the machine, which is in second place.
Counteraction: None.

Normal: Creates a power shield around the machine.
Advanced: Makes the machine invisible to the homing means, the rocket in the first loses the target. The effect disappears after the first collision.

Normal: A power ring is created around the machine, which throws into the sky any adversary who has fallen into the affected area.
Advanced: The same, but two rotating rings are added, which increase the area of ​​defeat and attract nearby enemies to the player.
Counteraction: None.

Normal: Very difficult to use weapon, but very productive. From the car of the player two beams are pulled, and any car that has come under impact is frozen in the air for a period of 3 to 5 seconds. A frozen vehicle is not affected by missiles or other types of weapons.
If you hold the button - then you can delay the moment of the shot, while the enemy machine is not in the affected area.
Advanced: When you click the "Rear View" button, the shot will be fired back.
‹
›
Home
View web version