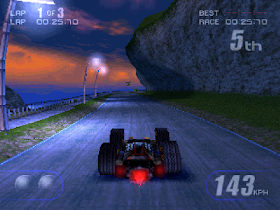 Genre: Action, Racing / Driving
Perspective: 3rd-person
Gameplay: Arcade, Shooter
Published by: Psygnosis Limited
Developed by: Attention to Detail Limited
Released: 1999
Platform: PlayStation (PSX, PS1)
The game is a futuristic car racing simulator. The main difference from most similar ones is the speed of cars, the presence of a large arsenal of various futuristic weapons, the game has a physics engine, unique for that time, allowing you to move along the floor, ceiling, walls.
The game has 6 cars, with the names Tony, Lothar, Ria, Jet, Leon and Lenny. All cars differ in their characteristics, after passing the campaign at the Easy level - the seventh Yuri car (police officer) is added, which will play against the player. After passing the campaign at the level of Hard player gets this car at their disposal.

The game has several "worlds", each of which has several tracks that differ in size and complexity.

Each car can carry two units of weapons or bonuses that can be used at any time. Receiving weapons or bonuses is carried out by hitting the luminous tags on the track, which puts some kind of flying device. The type of weapon or bonus received when hitting a tag is determined randomly. The weapon is divided into defensive and offensive.

The rocket, which flies across the entire route, overtakes the leader, turns around, and sightingly attacks. It can be knocked down by the terrain, sharp turns, tunnels.
Counteraction: Turn on the shield, flying towards a rocket to attack with a gimlet, open a portal, with a certain skill - you can shoot down a single rocket.

A tunnel is created in space, which flies in front of the car and clings to the vehicle in front, or it breaks against the walls. If within 3 seconds the attacked from the portal does not get rid of - then it will be behind the attacker.
Counteraction: Gimlet, ram of any object, stop the machine.

A single rocket, by default aimed at the nearest object located on the track, in the absence of such - flies forward until it encounters an obstacle. The player has a button "Sight", which allows to aim at the vehicle in front. If you click "Rear View" and "Sight", then you can aim back, which requires great skill.
Counteraction: Shield, maneuvering, moving out of sight.

Rays in the form of lightning, freezing tires of all nearby cars, as a result of which the machines lose control.
Counteraction: None.

A triple rocket, being released - flies forward, “through”, along the terrain of the track, until it crashes into an object or a wall. If 2 or more cars fall on the way, everyone will be attacked, and the rocket will fly farther. In deathmatch mode - this is the only available weapon. When it hits the enemy, the enemy dies and is reborn on the respawn point.
Counteraction: Shield, maneuvering.

The effect when for all the machines of the enemy time becomes "viscous", and the speed is reduced to 10 times. Never gets the first.
Counteraction: Running another time warp will cancel the effect of the currently running. But he also does not work.

The power shield around the machine, allows you to withstand one hit of any rocket, or several rams, depending on the strength of the object, without loss of speed and control.

The car gets a push of acceleration. You can accelerate and just moving along the road, using blue pads.
‹
›
Home
View web version