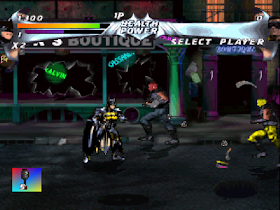 Genre: Action
Perspective: Side view
Gameplay: Beat 'em up
Narrative: Martial arts
Setting: Fighting
Published by: Acclaim Entertainment
Developed by: Iguana Entertainment
Released: 1996
Platforms: PlayStation (PSX, PS1), Super Nintendo (SNES), SEGA Genesis / Mega Drive
The name of the legendary Batman, will certainly attract fans of his adventures to this game. Of course, this popular story justifies itself, and in some respects the game looks quite attractive. It is necessary, however, to note that the developers obviously worked at half strength. The action of the game is rather messy, and the screen is often cluttered with a lot of minor details. The action takes place quickly, but sometimes even too quickly. Hordes of enemies are attacking at the same time, the sensors of life blink all the time, and the control system does not allow to use numerous additional sources of energy in time. Upon careful consideration, both the actors (including the Bosses of the levels) and the technical means (for example, the Sikorsky military helicopter) turn out to be somehow unfinished.