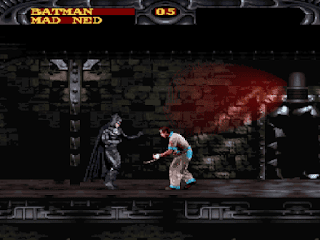 Genre: Action
Perspective: Side view
Gameplay: Beat 'em up / Brawler, Platform
Narrative: Martial arts
Published by: Acclaim Entertainment
Developed by: Acclaim Studios London
Released: 1995
Platforms: Super Nintendo (SNES), SEGA Genesis / Mega Drive, PlayStation (PSX, PS1)
Grandiose - always happens by accident. And vice versa: if it was planned to do something unthinkable - in the end something will always spoil everything. The case with the patient "Batman Forever" is a clear confirmation of this theory. Everything is there: both the digitized actors, and good backgrounds, and music, and special effects ... for some not entirely obvious principles, the hero's control takes place in some standard fighting game, Mortal Kombat, for example. Accordingly - a series of hands, uppercuts, swings, "turntables" ... That for the fighting game is good, then for the "platform" can become a curse. On the example of this game it is clear, finally: the feature that distinguishes "Fighting" from "Beat'ep" - must remain crossed, in order to preserve the original charms of both genres. But the unsuccessful result of the experiment is also a result, and do not think, for God's sake, that the game is bad. Just the most managerial aspect has a significant impact on playability and even after a bit of getting used to it, it's still somehow uncomfortable ... Well, all right.
So, as has already been clear to everyone, the game once again continues the endless narrative of the mighty "Super hero" of all time and locations - Batman. This time, you have the honor of admiring the game made on the film with the same title, in which our legendary hero in one hundred and eighty-sixteenth time tries to eradicate from Gotham City the notorious villains who always invade the more or less peaceful existence of this settlement.
In this case, the villains are the Two-faced and long-standing enemy of the whole volatile-mouse, because Once a certain representative of this family provoked the spillage of some highly concentrated acid on his (two-faced, though not yet so called) honest person. Due to this action, the person, or rather, half of it, was terribly disfigured, and now having two completely different parts of the front side of the dermal head cover, the subject developed a dual personality, a feeling of some kind of eternal dissatisfaction, and in general ... why he became the villain is creased and eccentric, but not without a certain amount of personal charm.
Enemy N2 - Mysterious. He loves, therefore, powder the brain of Batman, and not only him. In his elegant green-questioning outfit and with disastrous schizophrenic inclinations, he is (in co-operative, of course, with villain N1) a big and serious danger to the society, which is required to be eradicated instantly. Is not this the favorite task of super-heroes? Is this the true truth of life? - In that! - Batman thought, and, taking the armpit of his best assistant Robin (who was, by the way, an acrobat), gets out into the thick of events. And what? I suspect that, from an aesthetic point of view, this game is most consistent with the Batman spirit. (True, Batman Returns from Konami can easily make direct competition to it, but at the moment it's not described, so it's not very important) ...
Well, let's return to our Sheep ... volatile, that is, mice. - Traced clearly and clearly, and therefore, the use of Batman armament is based on the well-known "Street-Fighter" mode: all sorts of semicircles, back-forward, forward-forward with a variety of Punch'ami and kick'ami). And these most negative characters, showing a natural response, can also ask you for buns with poppy seeds, especially when their total number exceeds the critical number 1. Thus, the game's progress is a continuous fighting game. combined with constant movements on the screen, finding prizes, hidden rooms, etc.
The benefit of searching is greatly assisted by the well-known Bat-harpoon on the chain, hence. Your battles with the overwhelming mass of the enemy take place on a multi-storey background, which is essential, although not for long. On the way of the heroes - about ten large levels (about 80 small game zones), which are recommended to free from the painful presence of villains. Before each level is given the opportunity to choose the weapon most useful for its passage. And then - just ...
After sending several thousand ill-wishers to the grave, the Boss appears in the light of God. Usually it's a villain N1 or 2, different from ordinary residents of these places with a huge life scale, but sometimes there are huge heaps of "common people" or even the absence of "end of level guardian", which is often a very facilitating factor ... Well, that's all, therefore, information about the course of the game. There are no more incomprehensible factors in it (though, who said that all of the above is not a statement of obvious things? But after all, how should one describe it?), Except for the problem of jumping down. In addition to pressing the "down" key and continuously and continuously chiseling through all the remaining buttons, the method has not yet been found. Okay, now - on the technical side of all this, most ...
The game is made awesome: perfectly animated. "live" figures of characters, built 3-D like "Donkey Kong", quite a variety of backgrounds, just a horrific number of movements and "magic" (although you can always carry with you only four) and quite a harsh level of complexity - it's good. It's bad (except for the features of control, for which you just shoot someone, in the good sense of the word.) It is an absolutely monotonous action, and the absence of "continue", which is desperately needed here, is especially pissing. But, if you are not confused by the above circumstances, rest assured that you can buy this thing. And even, probably, worth it.

Riddler becomes a playable character - Press start while in training mode.
Smart Bomb - Enter the level select code and start a level. Whenever you want press Start+L+R to destroy everyone on the screen.
Stage and Character Select and all weapons - At the Title Screen, press Left, Up, Left, Left, A, B, Y.
‹
›
Home
View web version