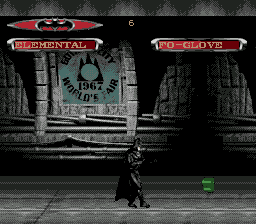 Genre: Action
Perspective: Side view
Gameplay: Beat 'em up / Brawler, Platform
Narrative: Martial arts
Published by: Probe Entertainment Ltd.
Developed by: Acclaim Studios London
Released: 1995
Platforms: SEGA Genesis / Mega Drive, Super Nintendo (SNES), PlayStation (PSX, PS1)
The game is based on the movie of the same name. Choose, for whom to play - for Batman or Robin. The graphics are excellent, the music is slightly gloomy, but also very good. From the combat capabilities of Batman in the game implemented basically the skill of pugilism (with the use of legs, of course). Robin is accompanied by a stick. To achieve high places, the heroes use a harpoon with a rope, and before the beginning of each mission, you can choose a useful outfit. Enemies are diverse, like bosses.

Secret menu. While in the main menu, make sure the cursor is in front of "Play the Game" and press: left + up + left + left + A + B. From this menu you can get to any of the levels of the game, set it asCalled "sudden death" for your opponents, as well as much more.

Psychiatric hospital Gotam-City. It was from here recently fled one of the most dangerous and sinister criminals, a ruthless and sophisticated killer and a complete nutcase. The runaway patient is called Two-faced, and Batman now wanders but to the psychiatric hospital, "calms" the frenzied fools and throws their bombs to the ground. And interestingly: after blowing up a bomb on one of the screens, you can find a break in the floor through which Batman gets to the secret sublevel full of various bonuses.
Central Bank of Gotham. Rising up the elevator, floor by floor, Batman must get out on the roof and prevent the robbery conceived by Two-faced. The bank also has two secret sublevels: a basement and a technical floor. The first one can be reached if, having climbed onto the roof of the elevator, knock off the fastening with a beta-cable. And to get into the second, it is necessary to step to the right from the roof of the elevator in the area of ​​the twelfth floor.
Circus. Two-faced had time to foul and here. Appearing on the show, he laid a clock bomb in the circus, and now Batmeiu must have time for a limited time to get out on the roof and neutralize it. Collect all the bonuses in the form of hours, even if for this you have to make a small hook, the time you still win.
Warehouse. Once in the warehouse of the Mysterious (one shizankutogo friend Dvulikogo), be sure to break the boxes - they always have something useful.
Batman tears off the Mysterious's presentation of his terrible and terrible brain-pump machine, chases him around the level and finds him, naturally, at the very end, in a room with four switches. Otmutuziv villain, Batman must decide which of the four levers will send him to the next level. (I'll tell you - the upper left.) Lower left and upper right will give you a bonus, and do not touch the bottom right - it's mined).
Underground. Batman starts it on the platform, and then moves to the roof of the train. When he gets to the first car, you should point the hero forward, under the wheels of the locomotive (this is serious, except jokes). But do not be lazy and before doing this, go back to the tail of the composition - you will find a bonus.
Batcave. Scoundrels of Two-faced and Mysterious wandered into the holy of holies of Batman, into his cave and stole his fussy girlfriend. To the afflicted Batman only and remains, that with a grief to pick up the bonuses hidden by it under a lattice ahead of a batmobile.
The Island of the Enigma. Everything around is not reliable, deceptive and acidic, like at a raver party. At the end of the Batman level, another high-intellectually challenging puzzle for lighting the Mysterious Lanterns and a whole crowd of bosses are waiting: first two projections of the Mysterious, then, like himself, then Two-faced with knives, then the Mysterious Monster, which your weapon does not operate, again Mysterious, on this time the present, and, finally, the girl of Batman. Making sure that your blows to her, as they say, cucumber on the drum, save her, coming to her indecently close, see the inscription CONGRATULATIONS! and turn off the console. Nightmares for today will suffice.
‹
›
Home
View web version