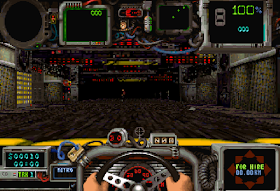 Genre: Action, Racing / Driving
Perspective: 1st-person
Gameplay: Shooter
Vehicular: Automobile
Setting: Cyberpunk / Dark Sci-Fi
Published by: Asmik Ace Entertainment
Developed by: Imagexcel
Released: 1996
Platforms: PlayStation (PSX, PS1), 3DO Interactive Multiplayer, DOS
So, in 1994, the game Quarantine for MS DOS and the 3DO prefix, which was very popular at that time, was released. The game was somewhat similar to Doom, except that the main character was an ordinary taxi driver, not getting out of the car. From this game, much has been taken for the GTA, take at least an Uzi shooting in the car. But all this stuff, consider the plot.
The action takes place in the city of Kemo, something reminiscent of Detroit. 2029, futuristic cars ... and a high crime rate. OmniCorp Corporation declares that it will help to return the city to its normal state and begins to build a wall around it for the purpose of "security." After 3 years, the wall is completed, the only passage in it is closed, turning the city into a prison.
In 2043, OmniCorp decided to test a substance called Hydergine 344 on city prisoners in order to make them law-abiding citizens. Unfortunately, the experiment failed, turning most of the inhabitants into insane, hungry for death. Drake Edgewater, one of the few who did not suffer from the substance, works as a taxi driver, bringing passengers and parcels to save money, improve his car, weigh his arms, and leave the damn city.
‹
›
Home
View web version