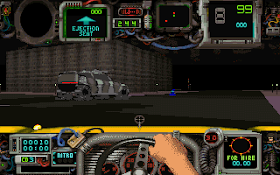 Genre: Action, Racing / Driving
Perspective: 1st-person
Gameplay: Shooter
Vehicular: Automobile
Setting: Cyberpunk / Dark Sci-Fi
Published by: GameTek
Developed by: Imagexcel
Released: 1994
Platforms: 3DO Interactive Multiplayer, PlayStation (PSX, PS1), DOS
Game Quarantine for Panasonic 3DO is difficult to attribute to a particular genre, it's a mixture of races and shooter. The game is made in a certain style of post-apocalypse. You have to play for a taxi driver, drive people up, and to receive money to improve your car and buy weapons. The game at that time was very cruel, it was possible to shoot down people, there were splashes of blood everywhere, etc. The game was developed by Imagexcel in 1994 for 3DO and MS-DOS. Later in 1996, only for the Japanese market the game was ported to Asmik for Sony PlayStation and Sega Saturn. For these consoles, the game was renamed to Hard Rock Cab and Death Throttle.
Like Detroit, the city of KEMO was known as the automobile giant. Satisfying the country's needs in cars until 2022. Over time, the crime rate increased, the economy collapsed, and the city plunged into riots. The criminals were already driving around the city in armored vehicles on an air cushion, terrorizing the inhabitants and not being afraid of retaliation. In 2029, OmniCorp Corporation promises to the city authorities that they can clean KEMO and revive it to a normal life. The proposal was accepted and the corporation began to erect a massive wall around the city in the guise of a "protective measure". Three years later the wall was completed, and the only way out of it was immured outside. Turning KEMO into a city prison, for everyone who is inside it.
Ten years later in 2043, OmniCorp decided to test the residents' reaction to the chemical element Hydergine 344. Presumably, this chemical was supposed to satisfy the citizens of the city of KEMO. It spread through the city's water supply. Unfortunately, OmniCorp did not provide for the chemical reaction in stagnant water. Causing damage to the brain causing insanity in many residents of the city. Most of the population became crazy killers.
Drake Edgewater is a taxi driver of the 21st century, the lucky one who did not touch the spreading virus. He delivers customers and hopes to find a way out of the city.