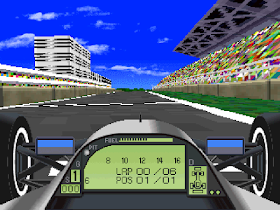 Genre: Racing / Driving, Simulation
Perspective: 1st-person, Behind view
Gameplay: Vehicle Simulator
Vehicular: Automobile, Track Racing
Published by: Pony Canyon
Developed by: Pony Canyon
Released: 1995
Platform: 3DO Interactive Multiplayer
F1GP is not the best business card of Formula 1. The races are really 3D, but the graphics are primitive, especially the image of a car with square wheels and stands with multi-colored squares instead of spectators. Yes, there is generally all square!
The start of F1GP is impressive - cool video inserts, a fairly high-quality menu, albeit in Japanese. In the game itself there is a function of flexible tuning of the car and replay is not so bad for that time.
I involuntarily remembered Virtua Racing. This ancient 3D Formula 1 simulator, though inferior in graphics, has an order of magnitude more dynamism. In F1GP, you control a turtle. The engine's roar was recorded naturally, but everything else was forgotten. Our "turtle" barely crawls, badly obeys the controls, and it also cuts where it shouldn't crash. Neither smoke nor sparks from a car fly, and if you look at the wheels, it is not always clear where the car is moving. Honestly, find yourself a more interesting game.
‹
›
Home
View web version