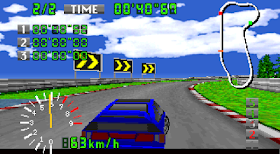 Genre: Racing / Driving
Perspective: 1st-person, Behind view
Gameplay: Arcade, Vehicle Simulator
Vehicular: Automobile, Track Racing
Published by: Matsushita Electric Industrial Co.
Developed by: Sanai Enterprise
Released: 1995
Platform: 3DO Interactive Multiplayer
The best autostimulator on 3DO Interactive Multiplayer was and remains, the unsurpassed first and she's the last (for this platform) Need for Speed ​​(the progenitor of modern NFS). The feeling of speed there might have been not the best, for the cars and those somersaults that they made in the air are pulling on a solid five, and the video was what it was, but the music ... In AutoBahn Tokio, of course, there is nothing like that, in essence, there is little that is. And by the way, why AutoBahn and why Tokio? But I am sure that the developers would not be offended if I called them a creation, less pretentious, let's say just Autobahn Tokyo. Moreover, they are a sin to be offended, and just the players might have been offended in due time.
Well, okay, what else is looking at the car models there is a thought, something like the fact that it’s not Gran Turismo (by the way, the name is also another) is in front of us, but duck, after all, there are only four of these models, and what’s the most offensive, the brainchild of the Japanese car industry, they do not recall. This is rather the Lada of the nineties. And here is Tokyo? Where is that Nippon, in the sense of Japan? Naive people will think that you can find samurasko-kamikazny flavor in the tracks and will be very disappointed to learn that there are only three tracks. Two roundabouts and one serpentine aka Georgian military road. The action of the first two takes place in the warm season during the day and in nature, and the latter somewhere at night, it is possible that in the cold and still really in a place that can be taken for the capital of the country of morning freshness ... in the sense of the rising sun ( I so Japanese pinned up).
From the point of view of graphic performance, if you drink a lot of sake, then you can remember Sega Rally and forget it right there, because the game looks more like an F-1 GP. Although not so terrible, but all the same buggy polygons, indistinct textures (but I can't remember anything about the textures in the F-1 GP). You can of course dismiss that it was impossible to do better for 3DO, but firstly it was not by chance that I mentioned Need for Speed ​​at the very beginning, and secondly, you can't do something that you can do as an example of an analog Micro machines in this pursuit of realism, nothing good can be achieved.
Well, there naturally, too, did not work. I tried and I can confidently say that it was not interesting to play. Not saved the situation and the two modes, that is, a record in the championship. The championship is only the name of the championship, but in fact the former three tracks and one opponent which must be overtaken. It is not very easy to do this even on an easy level of complexity (there are three of them, as far as I remember), however, you will still fail to break the car. I don’t know, maybe I’ve tried badly, but I didn’t break, crush, turn around. It was a new Lamborghini Diablo’s sin in Need for Speed, and here Lada didn’t even understand what the creators of the game are for.
As you probably already understood, the game is plain to say poor and very mediocre. No drive, no realism, nothing is not true. And this is not even so much my opinion, as a statement of fact.
‹
›
Home
View web version