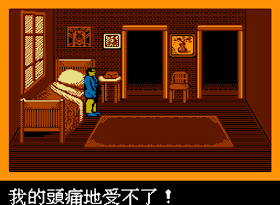 Genre: Adventure
Perspective: Side view
Narrative: Horror
Published by: Union Bond
Developed by: Mars Production
Platforms: Nintendo (NES), PlayStation (PSX, PS1), DOS
Legendary computer quest, more or less well ported to the NES. In the story, the main character Mike had a dream, as he was dragged into a place called the dark world, and implanted in his head a certain thing called Darkseed. As it turned out, it was all not in a dream, but in reality, so Mike had to look for a way to get back into this dark world and pull Darkseed out of his head before he hatched. The game is terribly interesting and at the same time quite complicated, because for everything about everything Mike has only three days, and if he doesn’t meet the time limit - GAME OVER. The hieroglyphs, however, greatly complicate the matter, so first of all Darkseed is recommended to those who were familiar with this game on PC.
‹
›
Home
View web version