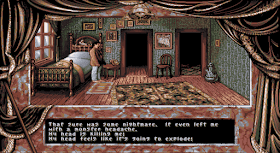 Genre: Adventure
Perspective: Side view
Narrative: Horror
Published by: Cyberdreams
Developed by: Cyberdreams
Released: 1992
Platforms: DOS, PlayStation (PSX, PS1), Nintendo (NES)
If you are tired of the standard novels about the invasion of evil aliens on our planet, but the concept of such games itself is still attracting your attention, then you can try the product of Cyberdreams company - Dark seed. As part of the game, you will go from a harmless headache to a "brain" (in every sense of the word) assault on positions occupied by an alien in the head of the lead character.
The game begins when, dreaming of writing, Mike Dowson, buys a house next to a neglected cemetery, so that in peace and quiet to begin to fulfill his dream. But a nightmare interferes with the plans of the unlucky writer, and he begins to understand the causes of the "stormy" night. The story of the unexpected adventures of Mike Dawson formed the basis of the plot of the saga.

The game is made in the form of a quality quest with not the most "sour" plot. During the gameplay you will have to solve many puzzles. Unfortunately, not all tasks can be attributed to completely logical puzzles. Therefore, the “preserved-uploaded” tactic would be most appropriate. Pixel-antigues are also encountered here, but, to the joy of the players, not so often. Time plays an important role in the game. You are limited in time: in 3 days the alien will destroy Mike's organism. Also, some items in the locations work at a specific time, and, being late for an event, you will not receive vital evidence and items. And, finally, it seemed to the testers that the period of playing time was very short: you do not have time to feel the atmosphere of the quest, as the sign with the words "The end" is already lit up on the screen
The graphics of the game is really exemplary. As for the sound, the developers did not really try: many sounds do not completely convey the actual noise background of the actions, and the quality leaves much to be desired.
As a result, we have an ominous quest story, on the backgrounds to which the designer of the “Alien” worked. A well-developed idea of ​​the quest gives us the opportunity to enjoy the paranoid pictures of the alien world. Interest in the storyline is maintained throughout the gameplay, despite even the need to save all the time and keep track of game time. But, if you're still not a fan of this kind of games, or the work of Giger, then this will not be the best alternative for you.
‹
›
Home
View web version