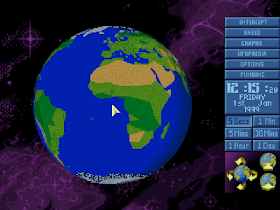 Genre: Strategy / Tactics
Perspective: Bird's-eye view
Gameplay: RPG elements
Visual: Isometric
Setting: Sci-Fi / Futuristic
Pacing: Turn-based
Published by: MicroProse Software
Developed by: Mythos Games Ltd.
Released: 1995
Platforms: PlayStation (PSX, PS1), DOS
To test the strength of earthlings at the end of a century and a millennium, an unknown alien race in 1999 decided that it was time to plunder and destroy the Earth. As commander of the armed forces, X-COM, you must build bases and mobilize to repel aggression. The new version of the most popular PC game is just as interesting with its combination of deep strategy and exciting fighting. The game will make the PlayStation owners pretty bad. At the beginning of the game you have to choose a place for the first base and wait for the UFO attack. In the future, the game action becomes more and more complex and fast, and your main task is to make decisions promptly, guided by a huge map of the world. We can say that this game is not for beginners and not for scattered, but for experienced players with a propensity for a sci-fi epic.

Two hours before the end of the month, transfer all of your scientists and engineers to another base, As they are on the road, they will not receive a salary (the poor!).

That's how easy it is to make millions of dollars. Go to the crash side, inspect it, and when you are done, study the Aliens Alloys (Fusion of Aliens). When you understand how "this" is arranged, then immediately produce as much as possible and sell with good profits. It costs this "good" $ 3000, and is sold for $ 6400. You can sell everything except the corpse of a stranger! When you learn it properly, you can get $ 20,000 for each!

No one will die

If you value your fighters and would not want to lose them, then use your memory card, constantly saving the game as follows. When you start the mission, save the game. Then, when you finish your "round" and do not lose a single guy, save the game again, after the "round of strangers" is completed. Continue the game until one of yours dies, then exit the game (Abort Mission) and load it again (Load Game). It is certainly tedious, but perhaps you will gain experience and in the future, you will click Aliens as nuts.

When you begin to perform a mission, press Down, Right, Circle, Triangle, Down, Right, and immediately jump to the next mission.
‹
›
Home
View web version