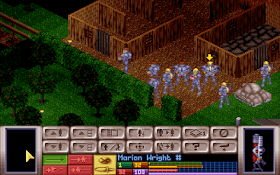 Genre: Strategy / tactics
Perspective: Bird's-eye view
Gameplay: Action RPG, Sandbox / open world
Visual: Isometric
Pacing: Turn-based
Gameplay: RPG elements, Turn-based strategy
Setting: Sci-fi / futuristic
Published by: MicroProse Software
Developed by: Mythos Games Ltd.
Released: 1994
Platforms: DOS, PlayStation (PSX, PS1)
On December 12, 1998, representatives of the most economically developed countries of the world gathered at a secret meeting in Geneva. One issue was on the agenda of the meeting: the creation of an international unit to combat the alien threat.
Since the beginning of 1998, evidence of UFOs invading Earth's airspace has emerged with alarming consistency. Rumors of inhuman experiments on humans caused public hysteria, which further exacerbated the situation.
The governments of different countries tried to independently solve the problem with aliens, but it became clear that this problem is worldwide. It was decided to create an international special organization to combat the extraterrestrial threat (X-Com - Extraterrestrial Combat Unit), which will have access to the latest developments, the best pilots, soldiers, researchers and engineers of the Earth.
It is up to you, dear player, to lead this organization.
X-COM is a legendary game that started a whole series. Many fans are convinced that the 1st in the series is the most successful of them all. It has very nice graphics (even without age discounts) and amazing gameplay.
The gameplay consists of two parts. 1st - strategic management of X-Com bases, assignment of research and production and decision-making to counter alien invaders. If X-Com fails to successfully repel alien attacks, then some countries may refuse the organization's services, blocking funding and signing a pact with aliens. If there are many such renegades, then Game Over: aliens will flood the Earth.
Part 2 begins when trying to impose on aliens (or when trying to reverse) a ground battle in tactical mode. The player controls his soldiers in a turn-based mode and tries to succeed (blowing up the alien base, capturing “tongues”, UFOs and artifacts).
If you have not played X-COM, you have a great opportunity to do it now, but every fan of the series probably already has a copy of it.
‹
›
Home
View web version