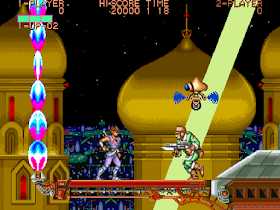 Genre: Action
Perspective: Side view
Gameplay: Platform
Visual: 2D scrolling
Setting: Sci-Fi / Futuristic
Published by: Capcom Co.
Developed by: Capcom Co.
Released: 1989
Platforms: Arcade Machine, PlayStation (PSX, PS1), SEGA Genesis / Mega Drive
The game about the ninja named Strider, which has good acrobatic technique and knows how to climb walls is not worse than spiderman'a, only you will not run around in ancient Japan, but in levels stuffed with robotic technology, which is trying to destroy you. As you can see from the abilities listed above, you will have to jump, run and evade all sorts of enemy shots, and this will not be so easy. In addition to all the game is filled with a variety of secrets, the finding of which you can even stumble upon the boss, so not by the way tucked in with a small margin of vitality. To facilitate your take into account are capable of a variety of gadgets, so conveniently located in stages, but alas not for long, so be prepared to see the inscription "Game Over" more than once, and sometimes not two, be patient and forward.
‹
›
Home
View web version