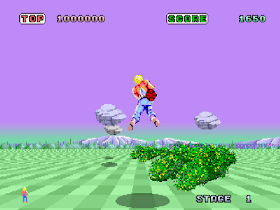 Genre: Action
Perspective: Behind view
Gameplay: Arcade, Shooter
Setting: Sci-Fi / Futuristic
Published by: SEGA Enterprises Ltd.
Developed by: AM R&D Dept. #2
Released: 1985
Platforms: Arcade Machine, SEGA 32X
Another example of "golden classics" arcade genre, a game that is almost impossible to describe.
Unfortunately, this is indeed the case. Plot? The aliens have invaded Earth, they have several types of ships, we are playing for a tough guy with a jetpack over his shoulders, allowing him to fly, and a huge gun in his hand that must stop this invasion. On this topic everything.
Game process? View from the third person, "hang" in the air and shoot at the alien ships appearing from afar, which gradually replace each other in terms of types, they also shoot at us, weapons and power of different types are different. Of course, it is necessary to dodge enemy shots, so it is possible to navigate the game screen, and this is literate and quick in terms of reaction to the current situation, moving is almost the basis of the whole game. We expect a few levels, at the end of each of which will be a pretty colorful boss. This is about the gameplay, too, everything.
Graphic component? At least "pretty nice", and maybe just "sweet." Everything is traced from the landscapes of the surrounding landscapes to the enemy ships and our hero, very carefully, and the ships even sometimes seem to be 3D. Some particularly enthusiastic praise of the game, in my opinion, does not deserve, but still it is, as it was said at the beginning, the classic of the genre (the game was released on all major gaming platforms of the time), so if you need a dynamic, moderately a complex and beautiful old arcade, then on Space Harrier is worth paying attention.
‹
›
Home
View web version