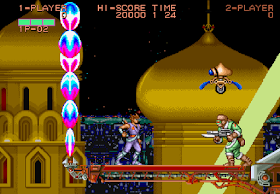 Starting in 1998, when the Earth was starting to recover from a series of cataclysms that had hit it hard, in the Kafazu region, in Eastern Europe, the mysterious lights suddenly appeared. Three days after the sighting, creatures that no one had ever seen began to invade the capital of Kafazu and to raze everything they encountered, enslaving all those who remained alive. Soon all the continents of the planet were reduced in the same conditions.
The cause of all this was an evil individual known as Grandmaster Meio, who had been studying life on Earth from a distant nebula from time immemorial. Meio built a space base, known as Third Moon, between the Earth and the Moon, which served to his troops as a station from which to proceed to the invasion and devastation of the world and to him as a control center.
The game is set in 2048, when by now 80% of the living creatures on Earth had been eliminated; from an island lost in the seas of the South, Moralos, the hero of the game, Strider Hiryu, the youngest of all the warriors (the Striders) trained to be able to defeat the armies of Meio and bring peace to the world.

The game proved to be very particular in the panorama of the games rooms of the time: the action was extremely frenetic and the ninja-style ability of the protagonist to do somersaults, cling to platforms and climb walls with a grappling hook had not yet been exploited. Even the weapon supplied to Strider was something unusual: a cutting weapon called Falchion vaguely resembling a scimitar but able to generate a blade made of plasma able to cut metals.
Strider is able, by collecting certain power-ups, to evoke pods in the form of small floating robots (the Dipodal Saucers), able to orbit around him and to shoot projectiles in search. Collecting two robots it is possible to obtain a third type of pod, a robotic tiger, which can only be obtained when two icons have been collected for the robots and a third one is collected; at that point the two little robots disappear and the panther will appear. The panther follows Strider and automatically attacks each enemy in front of him, with the drawback that if the Strider were injured, the panther would automatically be lost. There is also a fourth pod, a robotic hawk (Robot Hawk) that hovers above Strider and destroys every enemy he comes in contact with; it automatically disappears after about a dozen seconds.
There are also other types of bonuses: the Hi ideogram regenerates a unit of energy, the ideogram Ryu increases the size of the energy bar (from three units to a maximum of five) and HiRyu ideograms that return all the lost energy. Then there are bonuses that double the size of Hiryu's weapon, which give an additional life, which give a temporary invincibility and give points.
‹
›
Home
View web version