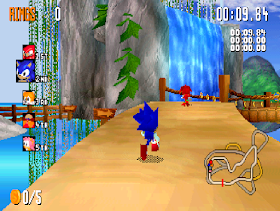 Genre: Racing / Driving
Perspective: Behind view
Gameplay: Arcade
Art: Anime / Manga
Published by: SEGA of America
Developed by: Travellers Tales (UK) Ltd.
Released: 1997
Platform: SEGA Saturn
Sonic R is a 3D racing game. According to the story of the hedgehog Sonic and the fox Tails planned to rest, but these plans prevented the advertising of the World Grand Prix. Initially, the characters were not interested in the event and were not going to participate, but later Sonic learns that the race is taking part, Dr. Robotnik. Later, the main characters learn that the evil scientist has found the location of the rare and powerful Chaos Emeralds with which he is going to conquer the world, and the World Grand Prix is ​​a trap to divert the attention of the blue hedgehog. Sonic and Tails, as well as echidna Knuckles and hedgehog Amy decide to participate in the race. The main prize is the Emeralds of Chaos.
In general, the gameplay is similar to another series of racing games - Mario Kart, where you need to manage a character on karting; but here the emphasis is on jumping and reconnaissance, because in each route there are alternative routes and hidden paths. The player can choose one of ten characters of the series and participate in the race on one of the five available tracks (Resort Island, Radical City, Regal Ruin, Reactive Factory and Radiant Emerald), created in the style of the first games about Sonic. The winner is the hero who first came to the finish line. There is also a multi-user mode "Time Attack", where one or more players need to pass the level in a short time. It is possible to play both forward and backward. In the "Get Baloon" mode, you need to collect five balls scattered in the location, in as little time as possible, and in the multi-user version - the first to collect them. There is another mode - "Tag", in which the player needs to catch up and stop opponents by touching them.
During the passage of each track, the player can collect items scattered in different sections of the levels. In some areas with the help of rings, you can get a temporary increase in speed or the ability to open doors that help reduce the route; bonuses in the form of emblems help to walk on water or be invulnerable. Having found the Emeralds of Chaos on each level, you can unlock the inaccessible heroes: the sworn enemy of the blue hedgehog Doctor Robotnik, moving in a special apparatus "Eggmobile"; a metal copy of Metal Sonic, Tails Dolla, Metal Knuckles, as well as Super Sonic and the Eggrobo. In addition, each character has his own specific abilities and skills, for example, Sonic can run fast, and Knuckles can soar in the air. In the game settings, the player can choose any type of weather: clear, snow and rain.
After the completion of the development of Sonic 3D, Sega representatives asked the developers of Traveller's Tales to release a new game about Sonic in the genre of the race. Prior to this, the programmer John Burton created a new 3D game engine, which will later be used in Sonic R. In fact, the development began in February 1997 with the joint efforts of Traveler's Tales and Sonic Team. Designers from Sonic Team were responsible for creating race tracks and created a game concept, while people from Traveler's Tales were responsible for programming. At the same time, the developers tried to maintain the frame rate within 30 frames per second and tried to fully use all the features of the Sega Saturn console. According to the programmer John Burton, a special graphical method was used to create graphics, described as "12 transparent layers", which can be used only on the console from Sega.
For the first time, Sonic R was demonstrated at the June Electronic Entertainment Expo in Atlanta. By this time the game was completed by 40 percent. Release of the project on the console Sega Saturn took place in 1997. In fact, this is the first game of the Sonic the Hedgehog series, completely executed in 3D graphics. A ported version of the game on Windows with improvements in graphics was released a year later than the version on Sega Saturn - in 1998. Unlike the original, the levels automatically change weather conditions and time of day. Weather conditions can be selected manually in the game settings. There was a new camera angle and new lighting at the level of "Radiant Emerald". Multiplayer mode began to support up to four players, as well as playing on the network.
Sonic R was later included in the following collections of games: Arcade Collection (2000), Sonic Action Pack (2000), Sonic Action 4 Pack (2001), Twin Pack: Sonic 3D Blast & Sonic R (2002) and Sega PC Mega Pack (2003) . All these collections were intended for Windows. In 2005, on the consoles GameCube and PlayStation 2 released Sonic Gems Collection - another collection of games, which included Sonic R. In this version there are the same improvements as in the version for a PC, but there is no online game mode, but in the release for PlayStation 2 the possibility of multiplayer games has been reduced from four players to two for reasons of a limited number of slots for connecting gamepads to the console.
‹
›
Home
View web version