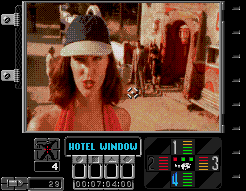 Before swap CD, save state to file, next CD, upload save state file, press button in game to resume.
Genre: Action
Perspective: 1st-person
Art: Full Motion Video (FMV)
Gameplay: Shooter
Setting: Sci-Fi / Futuristic
Published by: Sony Imagesoft
Developed by: Digital Pictures
Released: 1993
Platform: SEGA CD / Mega-CD
Ground Zero: Texas is one of the most ambitious games of the genre of Interactive Video for Sega Mega CD. This game was spent about 3 million US dollars. Took part in the creation of this game and Dwight H. Little. He is known for the films Marked for Death and Halloween 4: The Return of Michael Myers.
On a small town El Cadron, located not far from the border of Texas, attack aliens. The player is to save the townspeople, because they have mysteriously disappeared. Aliens are able to disguise themselves as people, just like in The Simpsons: Bart vs The Space Mutants. Your mission is to destroy aliens, but they can not be killed from simple weapons. You are armed with four BattleCams. You must get rid of the threat of Reticulan before it is decided to blow up a nuclear bomb.
‹
›
Home
View web version