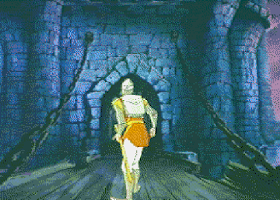 Genre: Action
Perspective: 3rd-person
Gameplay: Quick Time Events (QTEs), Timed Input
Art: Full Motion Video (FMV)
Setting: Fantasy
Published by: ReadySoft Incorporated
Developed by: Advanced Microcomputer Systems
Released: 1993
Platforms: SEGA CD / Mega-CD, 3DO Interactive Multiplayer, Super Nintendo (SNES)
Game Dragon's Lair for Sega Mega CD belongs to the genre of interactive movie. Imagine a funny cartoon in which you can really play. You have to press the necessary button at the right moment, and then watch the animation movie, after which you need to repeat the action. The game is full of black humor, and something similar to the game Brain Dead 13. In the game you have to play for a noble knight, who needs to release the beautiful princess Davenu from the clutches of a bloodthirsty dragon. But everything is not so simple, in the castle you will be waiting for various obstacles, traps and enemies.
The first game of Dragon's Lair was released in 1983, after which this game in different styles was released for almost every game console, even Dragon's Lair for Sega MegaDrive / Genesis. The truth was never officially published.
‹
›
Home
View web version