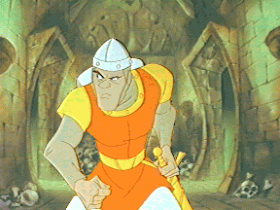 Genre: Action
Perspective: 3rd-person
Gameplay: Quick Time Events (QTEs), Timed Input
Art: Full Motion Video (FMV)
Setting: Fantasy
Published by: ReadySoft Incorporated
Developed by: Advanced Microcomputer Systems
Released: 1994
Platforms: 3DO Interactive Multiplayer, SEGA CD (Mega-CD)
Legendary game Dragon's Lair, it's hard to believe that she came to us from the 80's. Then in 1983 it was possible to play it only on Arcade machines. With the arrival in the 90's of people's houses more powerful game consoles, appeared and the port of this game for them. This game did not pass by and the game console 3DO Interactive Multiplayer. In the rest the game remained practically unchanged. We still play for the noble, but slightly eccentric knight Dirk the Daring, whose main task is to save the beautiful princess Daphne, which is guarded by a dragon in a castle enchanted by an evil magician. Due to which the castle was filled with various traps and evil creatures. In this interactive cartoon full of black humor, you, that would go to the end and see a happy ending, will have to work hard. After all, you need to press the right button at the right time. And it's all without any clues. But from this game, most of the animation in which was made by a brilliant Disney artist - Don Bluth, does not get worse.
Two Tips:

Unlimited Lives: Press Up, Down, Left, Right, Up, Down, Left, Right on the title screen.
View FMVs: Start a new game, and make Dirk lose all his lives. On the continue screen, press right, right, left, left, down, down, up, up, P. If you put it in correctly, the game will restart and show you all the winning & losing scenes.
‹
›
Home
View web version