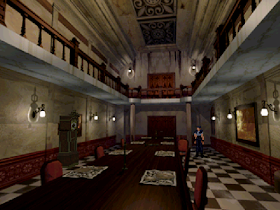 Genre: Action
Perspective: 3rd-person
Gameplay: Puzzle elements, Survival Horror
Visual: Cinematic camera
Narrative: Horror
Published by: Capcom Entertainment
Developed by: Capcom Co.
Released: 1997
Platforms: SEGA Saturn, PlayStation (PSX, PS1), Nintendo DS (NDS)
The original game takes place on the night of July 24, 1998 on the outskirts of Raccoon City, specifically in the wooded area surrounding the city, within the perimeter of the Arklay Mountains, where a series of strange murders occur, with victims whose remains They show signs of cannibalism. The local council sends the Bravo team from the elite group of the city's police, the S.T.A.R.S. (Special Tactics And Rescue Service or Special Tactics and Rescue Service) to investigate these facts. After losing contact with the Bravo team, it is sent to the Alpha team to find them and continue the investigation. The Alpha team locates the Bravo team's helicopter shot down, with no sign of survivors; except for a mutilated hand (in the Nintendo GameCube version is the corpse of the pilot, Kevin Dooley). While searching for new tracks in the area, the Alpha team is attacked by a pack of Cerberus, one of which kills a member of the team, Joseph Frost. The helicopter pilot, Brad Vickers, in panic, takes off leaving the rest of the team. Persecuted by the Cerberus who killed his companion, the Alpha team is forced to seek refuge in a nearby mansion that seems abandoned. With the Cerberus outside the mansion, Alpha team members (Jill Valentine, Chris Redfield, Barry Burton and Albert Wesker) are trapped inside. At that moment, after hearing a shot, the player (opting between Jill or Chris) takes control of the selected character. One of the first discoveries is to find the body of a member of the Bravo team, Kenneth Sullivan, being devoured by a zombie in a very disturbing scene in his time and very remembered by fans of the saga. Later, the player will find the rest of the Bravo teammates, injured or killed by the creatures that haunt the mansion. A series of documents and files found suggest that a clandestine research group is carrying out a series of illegal experiments on the property, under the authority and supervision of pharmaceutical conglomerates known as Umbrella. The grotesque creatures that haunt the mansion and the surrounding region are the result of these experiments, which have been revealed in the staff of the mansion and in various animals and insects from a powerful biological agent known as Virus-T, the which is extremely contagious (hence the Japanese title, biological risk or biohazard).
After touring a series of tunnels, corridors and buildings, the player discovers a secret underground laboratory that contains detailed records of these experiments under the supervision of Umbrella. In the lab, Wesker reveals that he is a double agent who works for Umbrella, who has used the other members of the S.T.A.R.S. as guinea pigs to test the effectiveness of the biological weapons created by the corporation and that their intention is to free the Tyrant-002 (depending on a series of decisions made by the player during the game, this moment and those that continue are different) , a giant humanoid monster. Upon release, the Tyrant-002 goes either to Wesker, executing it on the spot, or to Barry, whom he momentarily leaves unconscious. The player, then, must defeat him. Once this is done, if playing with Jill and saving Barry, Wesker activates the self-destruct program; if you play with Chris and Rebbeca is saved, she activates it. In the remaining cases this does not happen (the mansion is not destroyed and a series of different endings are obtained). Before escaping in the helicopter piloted by the previously fled Brad, the Tyrant leaves the ground and attacks the player (if the self-destruct system is not activated, the Tyrant does not appear, remaining alive in the mansion). Finally the Tyrant is destroyed by a rocket launcher that Brad throws at the player. Then you can see the correct ending, which varies depending on who survives Alpha and Bravo teams.