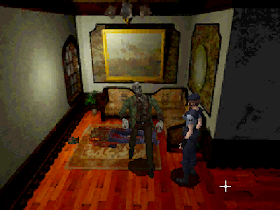 Genre: Action
Perspective: 1st-person, 3rd-person
Gameplay: Survival Horror
Published by: Capcom Entertainment
Developed by: Capcom Co.
Released: 2006
Platforms: Nintendo DS (NDS), PlayStation (PSX, PS1), SEGA Saturn
I think you should not talk about the plot. it is completely identical to what was presented in the original game on the PS1 / SS / PC. All the fun here is stored in the gameplay. If someone did not know, then Nintendo DS, on which this reissue came, has two displays.
We see the game on the lower display, the upper one is completely under the map, the health display (the screen flashes yellow at caution and red at danger) and equipped weapons with the amount of ammunition. It is convenient and eliminates frequent visits to inventory. Which, by the way, just underwent some cosmetic changes.
Everything is done to please the player's convenience. the lower screen is a touch screen and all the menu items can be selected with a cross, or by touching the stylus.
But this is not the beauty of the game itself. In this re-edition there are two kinds of "all familiar gum". The first one is the one we all played on the fixed consoles and PCs. The second is some rethinking of the original concept with the use of Nintendo DS capabilities. If you passed the first part more than once - the new mode is definitely for you. The plot is still untouched, but here are added new mini-games that are harmoniously woven into the game, as well as the location of objects (not key, unfortunately) and enemies. It turns out to be such an Advanced of Directors Cut, but in which instead of key items shuffled enemies.
Even old puzzles learned new tricks, for example: Time on the clock in the Hall should be set manually. It is interesting, is not it? Such surprises are not small. The most memorable moment: to do Richard's artificial respiration breathing into the microphone Nintendo DS. And not just, but in tact, otherwise Richard might die.
In addition to all of the above, random battles with enemies were added to the game. In such moments, the game goes into a first-person view, the character is armed with a knife and using the stylus on the screen, we shred various creatures with this knife. This approach will not let you get bored, and your hands will not become numb.
By the way about enemies, as mentioned above - they were "shuffled" in many places, so those who play for the first time will wait for numerous "pleasant" surprises.
And under the curtain three small "buns", the game added the ability to reload weapons without going into inventory, a separate button to get a knife and retaliatory attack if you grabbed a zombie (something like that was in the Outbreak series). To be honest, that was not enough. Do not forget the curious players. Try to poke Jill in the chest;)
But even this is not all. The game was introduced multiplayer. I already foresee complaints, they say, why he is here and so on. No, the multiplayer here is a separate mode and the plot campaign does not apply. What did the developers try to surprise?
Multiplayer works through wireless communication between two Nintendo DS. Accordingly, to play with a friend - you need two laptops and two cartridges. There are two modes here: The first is Versus. By the rules, he is more like a mercenary from Resident Evil 3. Ie. the task of the players to pass the level and score points more than others. Who has more - and slippers. The second mode is the Cooperative. Here the rules are as follows: It is necessary to pass certain levels, having one set of HP at all. You can change the found things, weapons. There are also bonuses, for example, being in the same room - players receive a bonus to damage. At the end of each level is the boss.
And instead of an afterword and various assessments, a few words. In my opinion - this is the full and best edition of the first part of the game. Here, and an entertaining multiplayer and a new game mode, which will please both veterans and beginners - it turns out that for the same money, we get two games in one. The game is worth your money, because if you want nostalgia, and replay in a blind to the holes, Resident Evil 1 does not pull, play in this re-release.
‹
›
Home
View web version