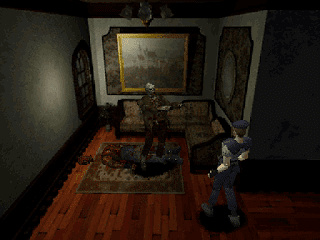 Genre: Action
Perspective: 3rd-person
Visual: Cinematic camera
Gameplay: Puzzle-solving, Survival Horror
Narrative: Horror
Published by: Capcom Entertainment
Developed by: Capcom
Released: 1996, 1998
Platforms: PlayStation (PSX, PS1), SEGA Saturn, Nintendo DS (NDS)
In principle, the game Resident Evil does not need to be introduced. This is one of the most famous games of the genre Survival horror and the first in the series Resident Evil. In Japan, the game came out under the name Biohazard. This name more accurately reveals the essence of the game. After all, in the game we have to deal with a virus that turns people into zombies, and all living things into monsters. Release of the game took place in 1996.
At the time of the release of the game, the action in the game took place in the near future, in 1998. Not far from the small town of Raccoon City monstrous murders began to occur. The police reports indicated that the attacks were committed in groups of about 10 people, and the impression was created that the victims were eaten. The police could not find the killers, and then the special detachment "S.T.A.R.S." (Special Tactics And Rescue Squad), broken into the teams "Alpha" and "Bravo", was brought to the case.
First, the Bravo team is sent to investigate, with which the connection is soon lost. After that, they are sent to their search for the Alpha team. During the circling of the area where the team "Bravo" last time contacted, the soldiers of the team "Alpha" notice the column of smoke emanating from the ground, and make the decision to land. After landing, the detachment members carefully examine the perimeter. It turns out that the smoke was coming from the Bravo team helicopter, but they can not find the team members themselves, which is also strange, the helicopter has their untouched equipment ...
The Alpha team begins the search. Everything is going fine, but suddenly a team member Joseph Frost finds a gun in the grass. Lifting him, he notices that the grip is still clenched by someone's torn hand. Suddenly, out of nowhere, a terrifying sight of a dog is being thrown at him. He tries to fight off the dogs, but the forces are unequal, and he dies a terrible death right before his companions.
At this time, the pilot of the team, "Alpha" Brad Vickers, hearing the shots, losing his temper and flies away, leaving the team. Seeing the departing helicopter, the soldiers decide that Joseph will not help, they flee, running back from the critters. Soon they notice a mansion and go there. The door is not locked ...
That's from here, in fact, and start all the adventures. Now the survivors have to explore the mansion, find out what happened here and find a way to return alive to the base.
We have to take on the role of one of the agents Jill Valentine or Chris Redfield. You need to explore the mansion and the surrounding areas, collect various items, solve puzzles and, of course, fight with various zombies and monsters. In the course of the game we will find various files that will help us understand what is happening here.
‹
›
Home
View web version