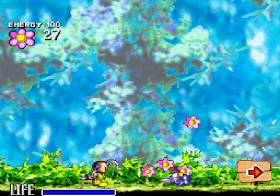 Genre: Action
Perspective: Side view
Gameplay: Arcade, Platform
Visual: 2D scrolling
Published by: Hudson Soft Company
Developed by: Artoon Co.
Released: 2002
Platform: PlayStation (PSX, PS1)
Pinobee is a 2D platformer where, as a robot-bee, overcoming 22 levels and two bosses, hasten to the aid of your grandfather who was kidnapped, who, in general, is not the grandfather, but rather the Creator of Pinobee. The game is the port of the game for GameBoy Advance - Pinobee: Wings of Adventure, which does not prevent the game from shining and on a more advanced platform which is PlayStation - bright colors, convenient controls and a wonderful environment will please fans of these games. The gameplay is classic for games of this kind, except that Pinobee flies most of the time (the bee is still), but classical techniques of jumping on the heads of enemies, symbol collecting and super-ability are not forgotten.
‹
›
Home
View web version