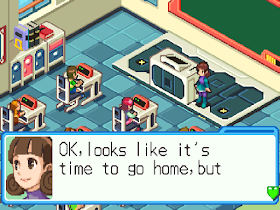 Genre: Role-Playing (RPG)
Perspective: 3rd-person
Visual: Isometric
Art: Anime / Manga
Pacing: Real-Time
Setting: Sci-Fi / Futuristic
Published by: Capcom Entertainment
Developed by: Capcom Production Studio 2
Released: 2006
Platform: Game Boy Advance (GBA)
Action with a weighty share of RPGs. I never would have thought that the old Mega Man (Rockman) would be holding out to our days with you. I personally buried him even with hobbies console SEGA Genesis, thinking that this hero will remember only the fans of the eight-bit. As it turned out a decade later, our hero got along well with other excellent consoles, and even got variations. So, for example, Mega Man and Mega Man X are two series of games that are not related at all in the storyline, but the Mega Man Battle Network gives us a tempting opportunity to plunge into an even more fascinating and mysterious game world. On the author of this text, he made the best impression, why he sat down to play, but after a couple of days he was forced to continue the game reviews of the games of the GBA, and without having completed this masterpiece. By the way, as already accepted earlier, the sixth part is available in two versions of Cybeast Gregar and Cybeast Falzar. The difference between them I think caught.
‹
›
Home
View web version