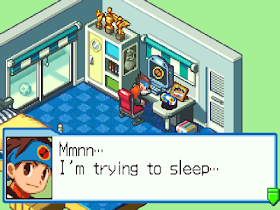 Genre: Role-Playing (RPG)
Perspective: 3rd-person
Visual: Isometric
Art: Anime / Manga
Pacing: Real-Time
Setting: Sci-Fi / Futuristic
Published by: Capcom Entertainment
Developed by: Capcom Production Studio 2
Released: 2005
Platform: Game Boy Advance (GBA)
In the fifth series of games, Mega Man has two options. There was a new combat mode, as well as the possibility of teamwork. To the players can join up to 6 allied characters, many of which you have seen in previous games, and they have to restore controllability and peace in cyberspace, fighting with Nebula. The Soul Unison system is also present, as is Dark Chip. The plot of the game of both versions of the game is quite similar, but the secret characters in them are completely different.
‹
›
Home
View web version