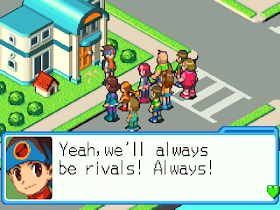 Genre: Role-Playing (RPG)
Perspective: 3rd-person
Visual: Isometric
Art: Anime / Manga
Pacing: Real-Time
Setting: Sci-Fi / Futuristic
Published by: Capcom Entertainment
Developed by: Capcom Production Studio 2
Released: 2006
Platform: Game Boy Advance (GBA)
The players again control the young Lan and the excellent Blue Robot, traveling through the futuristic city of Cyber ​​City, as well as the virtual space that helps to use computer terminals. The plot of the game is related to the history of two ancient creatures that possessed incredible power, and it can be temporarily used by Mega Mann. Depending on the above two versions of the game, Mega Man, using this ability, can turn into a wolf or a bird. At the same time, the speed of movement, the rate of fire and the attacking power increase noticeably. By the way, Mega Man can, as it were, download the abilities of defeated enemies, using the so-called "cross system". Blue Bomber is fighting computer viruses in cyberspace. It will be joined, so-called, Link Navis, five of which are presented on each of the cartridges of both versions of this game. There is also a multiplayer mode in which players can exchange programs, combat chips or participate in battles with Netbattles using the link cable.
‹
›
Home
View web version