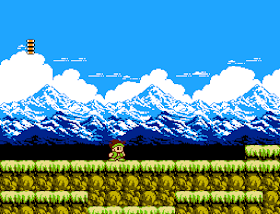 Genre: Action
Perspective: Side view
Setting: Fantasy
Published by: Taito America Corporation
Developed by: Takeru Co.
Released: 1992
Platform: Nintendo (NES)
A feature of the game is the presence of four game characters, each of which has unique abilities. The first four levels are passed by each hero separately, which allows the player to become familiar with their strengths and weaknesses; In all subsequent levels, the player can switch at any time between the characters.
The game has a password system that provides direct access to various levels.

The story told in the game is uncomplicated. The raging storm freed from captivity the dark prince, who decides to capture the whole world. The fate of the kingdom is under threat, and the king sends four heroes an order to come to his palace. From this moment begins the game part, in which the player will collect the heroes in the palace and lead them further into the liberation campaign.
‹
›
Home
View web version