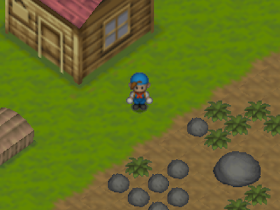 Genre: Simulation
Perspective: Bird's-eye view
Gameplay: Managerial / Business Simulation
Visual: Isometric
Published by: Natsume
Developed by: Pack-In-Video Co.
Released: 1999
Platforms: Nintendo 64 (N64), PlayStation (PSX, PS1), Nintendo DS (NDS)
A very funny game, a simulation of life on the farm (a remake of the same name with Super Nintendo). You will grow animals and plants, take into account weather conditions, you can even find yourself a wife. The game has a lot of secrets, from the casket to the power apples! One of the simplest secrets is to catch a small green fish and throw it into the pond next to the fisherman's tent and appear watery, which will give a blue power apple! (So you'll never get sick in rainy weather). Or, for example, if you marry Anne, she will feed the hens and take care of the animals! (rarely on rainy and simple days! at OTHER OWN PLUSES!)
‹
›
Home
View web version