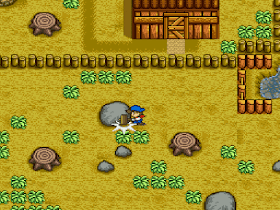 Genre: Simulation
Perspective: Diagonal-down
Art: Anime / Manga
Gameplay: Managerial / business simulation
Published by: Natsume
Developed by: Amccus
Released: 1997
Platforms: Super Nintendo (SNES), Nintendo DS (NDS), Nintendo 64 (N64), PlayStation (PSX, PS1)
Many people know and have heard about this game, it is, of course, a farming simulator. Here is one of the best original and original games on the Super Nintendo, on a system where a lot of bold projects and interesting ideas have been implemented. This is the very first implementation of the legendary series from Natsume. I bet that this company never thought that this game would be so successful that every self-respecting gamer would know it. Such this realization is in the present days. The graphics make excellent use of all the features of the SNES. There is a change of seasons, and the whole gameplay will be accompanied by all sorts of effects. Sound components are made at a decent level. A cash cow, for example, will moo, and all such sounds are made so believably that you just get used to the game. There are also several songs that are performed during the change of seasons, all of which perfectly convey the given atmosphere. Harvest Moon controls are fast and responsive. The story depends on a lot of things that you do during the game. Everything is simple. Your parents and you live on a farm. At one point in your life, they leave you to take care of the farm, promising to return after three and a half years to see what you can do with the place. Natsume has developed a great game for its time that doesn't involve overkill, terrorists and the like. The whole process lasts 320 days, you have to plunge into the agricultural culture, sow and reap various crops, keep livestock and work on many things in order to make your life successful. You can even get married. Harvest Moon is one of the greatest projects of all time! This is a unique, original game that no other family farm can compare with.
‹
›
Home
View web version