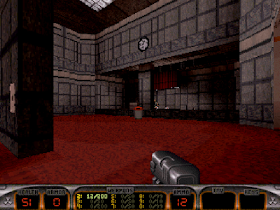 Genre: Action, FPS
Perspective: 1st-person
Gameplay: Shooter
Interface: Direct Control
Setting: North America, Sci-Fi / Futuristic
Narrative: Adult, Comedy
Published by: Deep Water, SEGA of America
Developed by: 3D Realms Entertainment
Released: 1997
Platforms: SEGA Saturn, PlayStation (PSX, PS1), Nintendo 64 (N64), DOS
I think among gamers there is no such person who has not heard of Duke. This cult character can not be confused with anyone. Briefly about the plot (although what kind of plot can there be in general). The world is again in danger and only Duke can save him, crushing crowds of monsters in his path, including the same pig-punk, flying octopus and other no less "attractive" creatures.

The game is a first-person shooter. Unlike the same Doom, you can rotate the camera freely in all directions. Many types of weapons: a pistol, a shotgun, a machine gun, an RPG (or more simply a Bazooka), grenades and many others. The world is divided into 4 zones, although in versions on the PC and Playstation the 4th zone is different. The levels are huge. In urban levels, you can find machines with soda, and billiard tables, where you can "drive balls", and of course toilets - sources of replenishment of health. And how can you save the world without letting steam out. All this is accompanied by an appropriate soundtrack. In general, almost all actions are accompanied by Duke's statements in the game. For example, if you wander into the sewers, Duke will inevitably drop "Hmmm .. I love the smell of the sewers in the morning", or, if you are inactive for a long time, hear "what're you waiting for, christmas?".
This game is unique from the category of Must play.
‹
›
Home
View web version