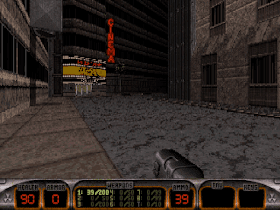 Genre: Action, FPS
Perspective: 1st-person
Gameplay: Shooter
Setting: North America, Sci-Fi / Futuristic
Narrative: Comedy
Published by: GT Interactive Software Corp.
Developed by: 3D Realms Entertainment, Inc.
Released: 1997
Platforms: PlayStation (PSX, PS1), Nintendo 64 (N64), SEGA Saturn, DOS
This is the first 3D game in the Duke Nukem series. The first two games in the series were 2D platformers, I do not know about these games, that they were in general.
Duke Nukem is a special agent of the US government. He returns to Los Angeles after the events of the game Duke Nukem 2. The radio receives a distress signal: the city is being assaulted by an aggressive alien race that has arrived to kidnap women. They use their bodies as incubators. Duke's spacecraft is knocked down by a rocket, but he manages to eject and land on the roof of the house. Duke has nothing to do but save the land once more.
The game has a large number of all kinds of weapons. The mass of various enemies and traps.
Total Meltdown - version for PSX, includes three original episodes and a new, "Plug N 'Pray", consisting of six new levels. The new episode included new enemies: two varieties of Pig Cops and a new boss named CyberKeef. The design of some levels of Plug N 'Pray is noticeably worse than in the original, but the levels themselves have become more complex.
To interesting facts about the game, one can attribute that there is an official port of the game Duke Nukem 3D for Sega Genesis / Mega Drive.