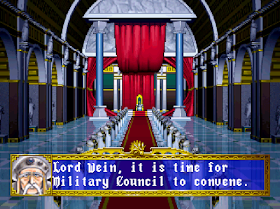 Genre: Strategy / Tactics
Perspective: Bird's-eye view
Gameplay: RPG elements
Visual: 2D scrolling, Isometric
Setting: Fantasy
Pacing: Real-Time
Art: Anime / Manga
Published by: Working Designs
Developed by: J-Force, SEGA Enterprises Ltd.
Released: 1996
Platform: SEGA Saturn
The goal of the game is to capture the castles and territories of the enemy. The fighting takes place in real time. For the troops there is a change of attacking formations and several tactical commands. For generals - the use of abilities. Between fights it is necessary to strengthen castles, recruit soldiers and give out awards to commanders. For its genre and country of creation, the game has a very unusual hybrid gameplay, which carries away for long hours.
‹
›
Home
View web version