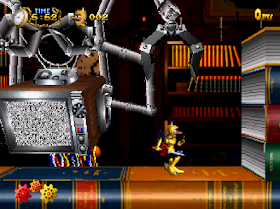 Genre: Action
Perspective: 3rd-person, Side view
Gameplay: Platform
Published by: SEGA of America
Developed by: SEGA Enterprises Ltd.
Released: 1995
Platform: SEGA Saturn
Direct continuation of the previous part. The game even begins with a stage of victory over its last leader. The heroes saved her princess, but now she somehow sleeps in a sleepy sleep. And while the toys are thinking about how they should act in this situation, Chelsea is kidnapped again, and you, together with your friend, have to save her again.
Since the sequel was released "in the hot pursuit", then many changes in the gameplay should not be counted, almost all the elements of the first part in place, except that there were dynamic stages where we need to move on an iron horse, sweeping away enemies from their path, and a couple secrets and bonuses on the levels. Added special mode in the Japanese version of the compilation of two games, in which you can play for Ginger, in the battles with the bosses. Well, technically the game was pulled up, it looks now a little better.
In general, the game is felt as well as the first part, and even there is such impression that it is just its second half, which they did not have time to complete in time. Nevertheless, this is still a good simple family platformer, which is sure to play with the console. Perhaps, do not become a failure in the future from a financial point of view, the series would grow into something more.
Two more games were planned - Clockwork Knight 3: Pengin War, it's Clockwork Knight Puzzle, which uses elements of the gameplay from the series Bomberman. The game was getting ready for release in 1996, but it was never finished, but in 2006 the network protuberances in the net. Another sequel, Knight N 'Knight, was made for the Nintendo GameCube, but in the end, too, it did not work out and information about it even less.
‹
›
Home
View web version